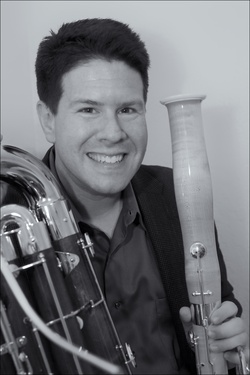 Pool's program, "The Romantic Bassoon," will feature music from 19th century Romanticism, either from the era or in its spirit, Pool said.

"The bassoon has a lyrical voice of great expression, which is not often heard in the orchestral setting," he said. "This solo recital seeks to exploit the melodic nature of the instrument."

Composers represented on this program include Sergei Rachmaninoff, Robert Schumann and Carl Maria von Weber, who are " all important composers of the 19th century," Pool explained.

On the program are Rachmaninoff's "Do Not Sing, My Beauty" and Weber's Concerto for Bassoon, Op. 75. A highlight of the concert is a performance of Schumann's Fantasy Pieces, Op. 73. "Originally for clarinet and piano, this piece embodies the essence of Romantic chamber music," Pool said. "It appears as an international contest piece for bassoonists this year."

Pool currently serves as the academy director of the Talis Music Festival and Academy in Saas-Fee, Switzerland. He also performs as contrabassoon/3rd bassoon with the Las Colinas Symphony Orchestra and is on the chamber music faculty of the Orfeo International Music Festival in Italy. A resident of the Dallas/Fort Worth metropolitan area, Pool is a frequent recitalist across the nation and abroad with appearances at numerous festivals and solo engagements. He has served as principal bassoon for a number of orchestras across the U.S.