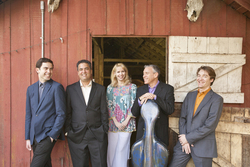 The SFA College of Fine Arts will present the Grammy award-winning Turtle Island Quartet performing with Nellie McKay at 7:30 p.m. Thursday, Jan. 29, in W.M. Turner Auditorium on the SFA campus.

The concert, which features the program "A Flower Is a Lovesome Thing," is part of the SFA College of Fine Arts' 2014-2015 University Series, "Connect," and is sponsored in part by Commercial Bank of Texas.

The night's performance will feature a kaleidoscope of music, ranging from the jazz standards of Billie Holliday and Billy Strayhorn to the sounds of the Weimar cabaret era of the 1920s to the songs of Doris Day.

"Since its beginning in 1985, the Turtle Island Quartet has been a singular force in the creation of bold, new trends in chamber music for strings," said John W. Goodall, associate dean of the SFA College of Fine Arts. "Turtle Island has a phenomenal international following, and this collaboration with the multi-talented Nellie McKay will no doubt guarantee a great night of music."

Renowned cellist Yo-Yo Ma has proclaimed Turtle Island Quartet to be "a unified voice that truly breaks new ground - authentic and passionate - a reflection of some of the most creative music-making today." Winner of the 2006 and 2008 Grammy Awards for Best Classical Crossover category, the group fuses the classical quartet esthetic with contemporary American musical styles.

Hailed by the New Yorker magazine as "funny and touching, ceaselessly clever and scarily talented," McKay just completed an extended run in the off-Broadway hit "Old Hats." Her music has been heard on the TV shows "Mad Men," "Weeds," "Grey's Anatomy" and "NCIS," among others. She has appeared on "Late Show with David Letterman" (with the Brooklyn Philharmonic), "The View," "Late Night with Conan O'Brien," "The Late Late Show with Craig Ferguson," "Live with Regis & Kelly" and "CBS Saturday Morning."

Prior to the concert, Jennifer Dalmas, associate professor of violin and viola at SFA, will present a 7 p.m. informative talk in Griffith Gallery about the artists and their music. The gallery is located across the hall from Turner Auditorium. The audience is invited back to the gallery for a post-performance reception to meet the performers and to honor the event's corporate sponsor, Commercial Bank of Texas.