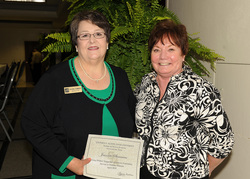 Jeannie Summers, left, was awarded the Edna Wilkin Teagarden Award for her dedication to the field of human sciences. She is pictured with Dr. Lynda Martin, director of SFA's School of Human Sciences, at the school's convocation Tuesday.

Jeannie Summers, who is the director of career and technical education at Nacogdoches ISD, accepted the award during the School of Human Sciences Honors Convocation. The annual award recognizes an SFA human sciences graduate who exemplifies extraordinary professional achievement in the human sciences field.

Summers earned her bachelor's degree in vocational home economics from SFA in 1975. She continued her education at SFA and earned a master's degree in 1979.

"Jeannie has received almost every award possible for her work during the past 39 years," said Dr. Lynda Martin, director of SFA's School of Sciences. "We are honored to add the Edna Wilkin Teagarden Award to her impressive list of accomplishments and are proud to have Jeannie as an SFA alumna."

Summers began her career in 1975 as the student relations coordinator at the Community Education Center in Nacogdoches. She taught family and consumer sciences at Laneville High School from 1976-82 and at Nacogdoches High School from 1982-2006. She has worked in her present role at the district since 2006. She was an adjunct faculty member at SFA from 2005-07.