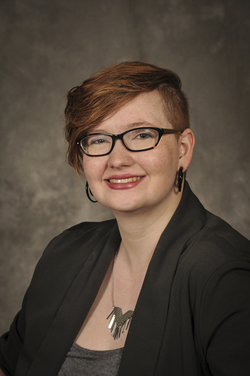 NACOGDOCHES, Texas - The Friends of the Visual Arts at Stephen F. Austin State University have selected Round Rock senior Megan Henderson as this year's recipient of the Gary Q. Frields Art Scholarship.

Nominated by her instructor Peter Andrew, graphic design professor in the SFA School of Art, Henderson was described as the ideal candidate for the Frields award because she "works hard, demonstrates dedication to each studio area that she works in, and develops her work to a respectable degree of quality," according to Andrew.

To be eligible for the Frields award, students must "demonstrate an exemplary work ethic, show versatility in the use of media and techniques in two or more areas, and show innovation and quality in their work," according to the criteria established by Frields.

Henderson achieved a 3.85 grade point average and is involved in extra-curricular art activities, among them Art Alliance and AAF Adhoc, contributing to and modeling the collaborative spirit of the School of Art, according to Andrew. She has worked as the art office receptionist and even served as a model in the figure drawing classes.

"Her attitude appears to be 'Yes!'" Andrew wrote in his nomination letter. "Megan has chosen graphic design as her primary focus area, and her competencies include her typographic skills, her illustration abilities, and her digital and web-based knowledge."

Henderson is also serious about her drawing, producing distinctively strong figure drawings in a variety of media, Andrew said.

"Megan has discovered through book arts in the printmaking studio how to unify her multiple strengths combining type and graphic design, illustration and drawing, and sensitivity to materials, into unified multi-media projects," he wrote. "My direct observation of Megan at work in her classes informs me that she habitually refines her work and invests much extra time to perfect her craftsmanship, a mark of professional attitude."

The FVA has established scholarships in the name of retiring SFA School of Art professors who were employed in the School of Art for minimum of 10 years before retirement and who contributed in a significant way to the mission of the Friends of the Visual Arts board and its fundraising activities, such as consistently donating art for fundraisers, by providing monetary assistance, or by serving on FVA committees or board.

Known among his peers as a great advocate for SFA's art students, Frields taught courses in design, drawing and sculpture and served as graduate program coordinator for the School of Art before his retirement in 2012. He was a recipient of the SFA Fine Arts Teaching Excellence Award and was appointed to the board of directors for the Texas Association of Schools of Art. Frields' involvement in national juried exhibitions helped in establishing the SFA Texas National, originating the concept, name and designing the logo. The event brings to Nacogdoches some of the most celebrated contemporary artists as jurors. He originated the Art Prom and was a founding member of The Cole Art Center @ The Old Opera House, creating the logo and contributing to concept planning.

The SFA Friends of the Visual Arts is made up of community members who support the arts in East Texas and provide monetary assistance to students enrolling in the School of Art by conducting fundraisers, such as the upcoming annual 12 x 12 event in July.