SFA's A Cappella Choir to perform music of Bach 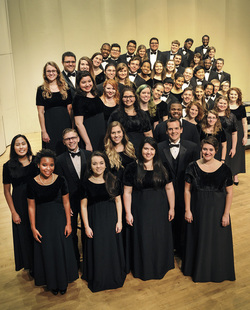 SFA's A Cappella Choir will perform at 7:30 p.m. Thursday, Oct. 29, in Cole Concert Hall on the SFA campus.

NACOGDOCHES, Texas - The A Cappella Choir at Stephen F. Austin State University will present its fall concert at 7:30 p.m. Thursday, Oct. 29, in Cole Concert Hall on the SFA campus.

The performance will be the choir's first concert at SFA after returning from a successful tour of Italy last May. The program will feature a wide variety of music from the 17th century to the 21st century, according to Tim King, director of choral activities for the SFA School of Music.

Among the works to be performed is "Singet dem Herrn" (Sing to the Lord) by J.S. Bach.

"Out of all the music - choral, keyboard, and orchestral music - that Bach composed, which is in excess of 1,110 works, he only composed six motets or anthems," King said. "' Singet dem Herrn' is the most famous of the six and exhibits Bach's mastery of composition and his devotion to music of the church."

The choir will also perform a set of two pieces by present day composers based on the subject of rain. "Aizej, Lietin" (Go Away Rain) by Eriks Ešenvalds is based on Latvian folksong. The performance will feature Haley Brant, Katy junior, and Kjersten Sanders, Sugar Land junior, on harp with SFA music faculty member Christina Guenther on wooden flute. "Cloudburst" by American Eric Whitacre will be performed complete with storm sound effects, King said.

The concert is a joint presentation of the College of Fine Arts and School of Music.