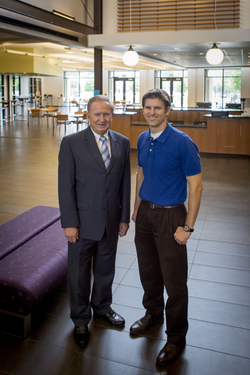 The Jim Towns Mentoring Professorship recognizes professors who instill, foster and promote a mentoring culture at SFA. The award is named for Dr. Jim Towns, a longtime SFA professor of communication studies.

Hubbard, who joined SFA's College of Sciences and Mathematics in 2005, teaches graduate and undergraduate classes, including algebra, calculus, geometry, trigonometry and finite math. His research interests are vertex algebras and co-algebras, mathematical finance and mathematics education.

Hubbard received his bachelor's degree from Point Loma Nazarene University and his master's and doctoral degrees from Notre Dame University, all of which are in mathematics.

"Dr. Hubbard exudes caring and counsel for his students," Towns said. "His commitment runs much deeper than connecting with students in the classroom. He takes the time and makes the time to listen and lead. His example is inspiring."

Hubbard said he's honored to follow in the footsteps of a professor who is well known for his commitment to student success, and he wants to continue Towns' legacy.

"A university education is more about an inclusion into a supportive community where students mature intellectually, emotionally and professionally," Hubbard said. "That kind of growth requires a deep personal investment in students as individuals-not just in their acquisition of a body of knowledge, but in their growth as adults. Mentoring is choosing to make that deep investment."

Funding for the mentoring professorship was largely raised by Towns with the help of former students, colleagues and friends.