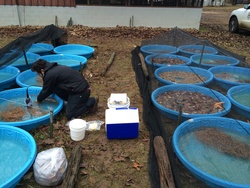 Past research confirms invasive Chinese tallow tree leaves negatively affect the hatching success of leopard frogs and other amphibious species. Ray Montez, an environmental science graduate student at Stephen F. Austin State University, is researching the differences in chemical compositions and decay rates of these leaves, which may contribute to the changes in East Texas' aquatic microbiological communities, as well as the broader ecosystem. Pictured, Montez extracts a water sample from a mesocosm, a controlled environment that simulates the natural world, containing Chinese tallow leaf litter. Photo courtesy of Dr. Daniel Saenz

"For every gram of soil, you can see up to a billion micro-organisms if that soil is healthy," Montez said.

He added that despite their diminutive stature, the multitude of single-cell organisms that live in the soil, water and air play an integral role in ecosystem function through symbiotic relationships with plants and animals. Each of these micro-organisms has different nutritional requirements; therefore, variations in the chemical composition of their primary medium, such as water, can result in drastic changes to their species composition. This can ultimately affect the broader ecosystem, he said.

Under the direction of Dr. Alexandra Van Kley, SFA professor of biotechnology, and Dr. Daniel Saenz, SFA adjunct graduate faculty member and research biologist with the U.S. Forest Service, Montez is examining the difference between the chemical composition of invasive Chinese tallow tree leaves and the leaves of native East Texas species to determine how those variances may contribute to changes in East Texas' microbiological communities.

To do so, Montez assembled mesocosms, controlled environments that simulate the natural world. He compared the decay rate of leaves from native species and the Chinese tallow and tracked the chemical changes that occurred in the water as leaf decomposition took place.

"We're seeing that pH and dissolved oxygen is drastically changed when you introduce these (Chinese tallow) leaves, even for a 24-hour period," he said.

According to the United States Department of Agriculture, the Chinese tallow was first introduced to the U.S. Gulf Coast in the early 1900s in an attempt to establish a soap industry using the tree's waxy, tallow-like secretions. Despite the industry's lack of success, the tree gained popularity as an ornamental species. The species' extreme reproductive potential and adaptable nature led to its spread across the Southern U.S., in many cases completely altering ecosystems by replacing native vegetation and establishing a monoculture.

Saenz, who grew up on the Texas coast where Chinese tallow has been a species of concern for many years, said that during the past several decades, he has watched the Chinese tallow slowly expand its range into East Texas.
"It's a big concern," Saenz said. "It is the fifth most common tree in Louisiana and the fifth most common tree in Texas; so, it's a serious deal."

Montez said their experiments show the examined native species leaves contain different chemical concentrations and, in some cases, completely different compounds than Chinese tallow leaves. Furthermore, Chinese tallow leaves decay at a much faster rate in aquatic environments than the foliage of native trees, resulting in a rapid release of nutrients and an upsurge of microbiotic activity.

Previous research conducted by Saenz and SFA's College of Sciences and Mathematics' Department of Biology revealed the introduction of Chinese tallow leaves negatively affect the hatching success of leopard frogs and other amphibious species. Further lab investigations by Saenz led him to pinpoint changes that take place in the microbiotic community as the likely source of the drastic shifts in water chemistry.

Montez's research, which is being funded by the U.S. Forest Service, is a continuation of these initial investigations.

Chinese tallow leaves contain almost double the amount of calcium than native East Texas species, and this might contribute to other microbial species that could dominantly use calcium in their cellular structure, Montez said.

"Microbes are just like you and me," he said. "They require nutrients to grow, develop and reproduce. They just do it on a faster scale than we do, and because they can reproduce so quickly, they can have a large effect on ecosystem function."

Montez said they believe microbes rapidly utilize the surplus of nutrients released by the decaying Chinese tallow leaves and set off a series of chemical changes that acidifies the water and depletes it of oxygen. He explained that this is very similar to cultural eutrophication, a form of water pollution by which excess fertilizers and nutrients cause algal blooms that compromise a water body.

To determine which microbes may be responsible for the dramatic change in water quality, Montez ran water samples drawn at different stages of leaf decomposition through filters to preserve for future DNA analysis. Once the microbial DNA is sequenced, Montez will correlate the dominant species with the changes in water quality that occurred over time.

Montez said that recent advances in DNA sequencing now allow researchers to shed light on microbial communities, and this project is one step in better understanding the microscopic communities that shape our ecosystem.

To learn more about this and other research projects in SFA's Arthur Temple College of Forestry and Agriculture, call (936) 468-3301 or visit atcofa.sfasu.edu.