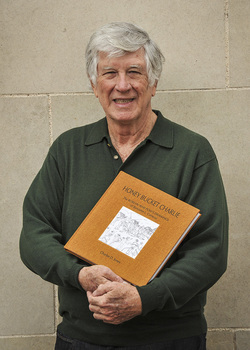 Charles D. Jones, director of the LaNana Creek Press, holds a copy of "Honey Bucket Charlie: The Korean War POW's Drawings of Benjamin L. Comeau," which will be showcased at a reception from 2 to 4 p.m. Sunday, March 8, at The Cole Art Center @ The Old Opera House in downtown Nacogdoches.

A reception to honor Comeau's family and showcase the newly released book will be held from 2 to 4 p.m. Sunday, March 8, at The Cole Art Center @ The Old Opera House in downtown Nacogdoches. The event will feature live music popular during the early 1950s, followed by a brief illustrated talk about the war and the POWs, the drawings and photographs used in the book.

Comeau's drawings "provide us with rare insight into the daily life and conditions of the Korean War POW experience," Jones said.

Invitations to this event have been sent to veterans' groups in the area, according to Jones.

"It would be great if we could get every Korean War veteran there, because we would like to dedicate this to them," he said. "Part of the purpose of the book, in using this one man's drawings, was to create an awareness of this aspect of the war."

"It is richly illustrated with the drawings, Comeau's letters from the prison camp, family photographs and propaganda photographs by one of the Chinese prison camp administrators," Jones said.

The book, published by the Stephen F. Austin State University Press, is augmented with a photo essay by acclaimed photographer Guy Gillette, the father of Pipp and the late Guy Gillette. Entertainer and storyteller Pipp and his brother, Guy, recorded cowboy music and were the recipients of the Western Heritage Wrangler Award for Best Traditional Album of 2010.

Their father had been sent to Korea by the American Red Cross to record the M.A.S.H. units.

"His poignant works provide an excellent context for the drawings of Comeau," Jones said.

Pipp Gillette, owner of the famed Camp Street Café in Crockett, will perform at the reception.

"Honey Bucket Charlie" includes introductory chapters that provide information about the war, the treatment of the Allied prisoners by the North Koreans and then the Chinese forces. It also includes information about the political climate in the United States during this time, and the treatment of the American prisoners when they were repatriated.

The book has an introductory chapter by Lewis Carlson, Ph.D., author of "Remembered Prisoners of a Forgotten War: An Oral History of Korean War POWs." Carlson, who is professor emeritus of history at Western Michigan University, also provided background information on the war and the treatment of the POWs.

The story of Johnny Johnson and his list of American and allied troops who died on the "death marches" and in the POW camps is included in the book, and also provides context for Comeau's images.

Comeau had enlisted in the Marine Corps during WWII and was wounded at Iwo Jima, earning his first Purple Heart. After his recuperation, he left the Marine Corps and joined the U.S. Army in 1946. He was assigned as a squad leader in an infantry unit when the Korean War (officially designated as a Police Action) began. In November 1951, his unit was in combat near the 38th parallel in the area known as "The Punch Bowl."

"During this battle, overwhelming Chinese forces overran Comeau's squad," Jones said. "When an enemy grenade landed in the bomb crater where the squad had taken cover, Corporal Comeau threw himself onto it to save his squad. For this action, he was later awarded a Bronze Star and second Purple Heart."

He was taken as a POW by the Chinese and remained a captive until June of 1953. Comeau remained in the army and later served in Vietnam, where he won a second Bronze Star. He retired with the rank of master sergeant.

Comeau's grandson was one of Jones' printmaking students who had made a smaller version of this book as a book arts class project.

"When I found out there were almost 100 drawings, I decided to make the full published trade edition that would have all the drawings and include background of the war and the POW situation," Jones said. "Then, when Pipp Gillette told me his father had been sent to Korea by the Red Cross to photograph the war, and he had this whole cache of photographs, he allowed me to draw from those, so the book also has a photo essay by his father."

Jones is professor emeritus in the SFA School of Art and a Regents Professor.