At Richard '70 and Pat Saunders' sprawling East Texas farm, it's a well-established fact that good things take time to grow, and Richard's ancestors began growing their farm nearly 150 years ago.

This spring - 145 years after Richard's great grandfather put down roots in the idyllic piney woods in Anderson County - generations of managing the land paid off in an unexpected way for Richard and his wife, both SFA alumni who met in Nacogdoches in the 1970s. The Texas Forestry Association, an organization of timber growers across the state, honored the Saunders with the 2015 Texas Outstanding Tree Farmer award.

The award is presented to timber growers who exemplify the best practices in land management by maintaining renewable forest resources, wildlife habitat, soil conservation and the production of forest products, according to the association.

"We weren't doing it for the award," Pat said, adding that the accolade took the couple by surprise.

The Saunders do it because it's in their blood and has been for generations.
When Richard's great grandfather moved to East Texas from Dickson, Tennessee, in 1870, he quickly found a dilapidated, two-room dogtrot-style structure along what is now FM 19 at the edge of Frankston.

The cabin already had a long history in the area before becoming the heart of today's farm. Originally, it was part of an unfinished fort and later part of Kickapoo Iron Works, which was abandoned following the end of the Civil War, Richard said.

Though Richard and Pat are the fourth generation to live in and add to the home, much of the original structure stands unchanged. Chisel marks left by the original carpenters are still visible on the massive beams forming the home's walls.

Scattered throughout the house, Richard and Pat can point out pieces of antique furniture from past generations of their family.

The recent award and others in previous years add to the farm's reputation, but within Anderson County at least, the home and land have always been well known.

When Richard and Pat decided to move to Frankston permanently in 1999, no physical address was on record for the farm, and the home was simply known by the community as "the old log house," which was even listed on the electric bill. It wasn't until they moved in that it was given a street address.

Richard's ties to the house aren't only through his family, though. After graduating from SFA with degrees in biology and chemistry, Richard worked for Texas Power and Light - the precursor to Oncor - until his retirement five years ago. When electricity-wired homes were becoming the norm, Texas Power and Light ran the first wires to the cabin and installed wiring in the home in 1930, Richard said.

For her part, Pat said she's been coming to the property since she met Richard, when the farm was still in the hands of Richard's grandfather, and she was always enamored with the place. So, the opportunity to move into the home and share Richard's dream of living there was her own "dream come true," she said.

"Every generation has added on to the house and updated it," she said. "If these logs could talk, what stories they would tell."

Like the home itself, changes have come throughout the generations to the acreage under the Saunders' care.

When Richard's father managed the property, cattle ranching was the main business. As the market for timber increased, the focus grew more and more to include trees. Richard said his natural passion for towering pines and hardwood forests were a perfect fit.

Though the Saunders still run cattle on the property, it isn't their goal to become barons of the beef industry. Conservation and responsible land use are where their focus lies.

With help from the Texas Forest Service and independent consulting foresters, the Saunders have developed management plans to balance the need for agriculture and conservation. The help they've received has been essential.

"We've not done anything on our own here," Richard said.

Even before the couple moved into the home, they spent a lot of time on the land cultivating it to become what it is today.

Most recently, their focus on conservation means they're planting chestnut trees to re-establish populations that were devastated by blight.

For the Saunders, the recreational and conservation value of the land is as important, if not more so, than the agricultural value.

Despite working tirelessly on the property day in and day out-what Richard calls the "7-to-9 job" that he took up after his retirement-he often comes home, cleans up, and he and Pat head back out to walk or ride through the woods and fields. 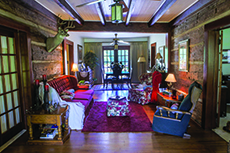 Part of the Saunders' home dates from the 1800s, when Richard's ancestors settled in Anderson County. The walls of the original home are massive hand-hewn pieces of East Texas timber, and adorned with antiques from the family's history.