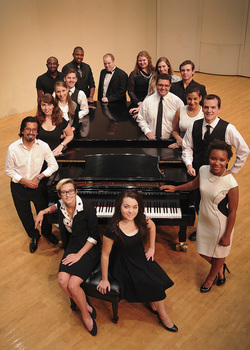 The Madrigal Singers is a chamber group comprised of upper lever vocal music majors at SFA. The group is well known in the Nacogdoches area, particularly for many caroling concerts at Christmastime, according to Dr. Tim King, director of choral activities for the SFA School of Music.

Among the works on the program is "Le Chant des Oyseaux" (Song of the Birds) by the 16th century French composer Clément Janequin.

"This is from a unique category of songs called program chansons (French for songs)," King explained. "The driving force behind the program chanson was to depict actual life sounds, such as the sounds of war or street sounds. In this, arguably the most famous chanson, Janequin recalls the various bird calls."

"Rutter wrote a set of vocal jazz pieces entitled 'Birthday Madrigals,' which were based on texts by Shakespeare," King said. "This set of songs was written to honor the great jazz pianist George Shearing."