History in the making: Radio/TV journalist discusses his induction into the Texas Radio Hall of Fame and events surrounding JFK's assassination 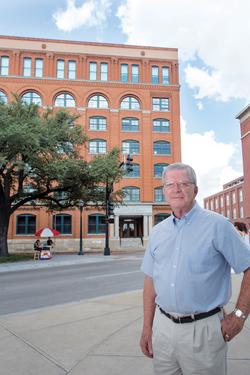 LIKE SO MUCH in history, Jerome Davis' career as a broadcast journalist can be traced to one incident.

In 1958, the 16-year-old Davis had no idea that dedicating songs on a Marshall radio station would lead to a storied career in more than one way.

Davis was naturally gifted in broadcast, though he didn't know it as a teenager, the Colleyville resident said.

"My girlfriend had one of those radio programs where you call in and dedicate a song to your sweetie," he recalled. "I was visiting her at the station one night, and she said, 'Why don't you announce a couple of the dedications?'"

The station's owner, Tony Bridge, heard Davis' spot and thought he had a voice for radio. Bridge offered him a job.

The rest is quite literally history, leading up to Davis' induction into the Texas Radio Hall of Fame in November 2015.

After graduating high school and studying at Panola College, Davis transferred to SFA and worked at the AM radio station KEEE in Nacogdoches under the pseudonym Rockin' Richard. He graduated from SFA in 1962.

The 1960s was arguably one of the most tumultuous decades in American history, and as a young journalist, Davis found himself in the middle of the events.

As the civil rights movement gained traction, he covered protests and demonstrations in his East Texas backyard. It was in Tyler that his career began to build steam with the opportunity to appear not only on the radio but also on television.

In August 1963, Davis was offered a job in Fort Worth. Two and a half months later, he was thrust into one of the nation's saddest and most-memorable moments.

"I was at Carswell Air Force Base the night President John F. Kennedy landed in Fort Worth," he said.

Kennedy arrived on Thursday, Nov. 21, with Vice President Lyndon B. Johnson and their wives to help raise funds for the Kennedy-Johnson re-election campaign and to help mend political fences among several leading Texas Democratic Party members who were at odds. Texas Gov. John Connally and his wife joined the group.

Davis followed the Kennedy entourage the next morning in Fort Worth, and he saw the president leave later that morning for Dallas, where he was scheduled to speak at a luncheon.

"I arrived back at the newsroom, and just after lunch, the newswire started to go crazy," the veteran journalist recalled.

Around 12:30 p.m., shortly after Davis' station finished the afternoon news segment, Kennedy was assassinated. "That started the whole weekend. For the next four days, we didn't get much sleep."

Davis chased leads and reported stories following the president's death, the wounding of Connally and the murder of Dallas police officer J.D. Tippit.

Lee Harvey Oswald was arrested for the crimes, and a few days later, when Oswald was being transferred from the city to the county jail, he was shot and killed at Dallas Police Department headquarters by nightclub owner Jack Ruby.

The next day, Oswald was buried in Dallas, and Davis covered the funeral.

"If I'd been older, it probably would have been very depressing because there was almost no one there but his family, the police and the media," he said. "Officials had a great deal of difficulty finding a minister to conduct the ceremony."

Davis said in all the turmoil surrounding the assassination, it was difficult to see the big picture, but in retrospect, there was a broad impact on the nation that began to solidify things he had heard rumblings about.

"It changed us. It changed attitudes," he said. "It really started the attitude that became the protests of the Vietnam War."

Davis continued working as a journalist for various broadcasting companies covering significant events in Fort Worth, including the construction of the Dallas/Fort Worth Regional Airport.

While the Kennedy assassination was certainly among his most memorable story assignments, Davis said it was a natural disaster in Lubbock that affected him the most.

In 1970, Davis was working at a TV station when two tornadoes ripped through the West Texas city, killing 26 people and injuring approximately 1,500.

"We flew in from Dallas as the sun was rising, and it was like viewing something out of a war movie," he recalled. "We had to work quickly to get film of the damage and conduct interviews, and then get back on the plane and head to Dallas."

Two years later, Davis left the news business to work in public relations for the soon-to-open Dallas/Fort Worth airport.

Davis oversaw the media relations aspect of the airport's dedication ceremony in 1973, which included the first landing of the Concorde supersonic jet. The airport officially opened to commercial service in January 1974.

Reporters from news outlets around the world attended the opening, and as a former journalist himself, Davis pulled out all the stops to coordinate the event.

He continued working in public relations throughout his career, serving as a coordinator for Texas Power and Light and working for the City of Dallas in the early 2000s.

Though he is now retired, Davis hasn't entirely left the broadcast business. He volunteers with KERA TV-13, the Dallas-area PBS affiliate. Davis said he sees volunteering as a way to continue serving the public.

In 2010, Tony Bridge, Davis' former boss and mentor, was inducted into the Texas Radio Hall of Fame. Bridge decided that some of the men he had helped bring up in the business deserved the same accolade.

Inductees into the Texas Radio Hall of Fame must be nominated either by members of the organization or a previous inductee. Bridge brought Davis' name to the table.

At 3:30 a.m. on July 1, 2015, Davis found out that his nomination had officially been accepted with a wakeup call.

"Tony Bridge called me and said, 'Well, I just want to be the first to congratulate you. You're in,'" Davis said.

Among the broadcasters honored in the Texas Radio Hall of Fame are legends like Walter Cronkite and Bob Schieffer. Davis said it's quite an honor to be in their company.