Guest oboist Forsyth to perform at SFA in double-reed recital 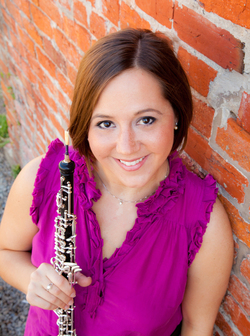 "We have a saying in the double-reed community, 'Double the reed, double the fun!'" Spring said. "This program highlights old and new repertoire for double-reed instruments and demonstrates the virtuosity and range of characters that the oboe and bassoon are capable of achieving."

Forsyth and Spring attended graduate school together at Florida State University. They now live in "sister cities" - Nacogdoches and Natchitoches - and have the opportunity to perform together again.

The program will feature Jenni Brandon's "The Wildflower Trio" and Geoffrey Bush's Trio for oboe, bassoon and piano. Forsyth will display her virtuosity on Johann Wenzel Kalliwoda's "Morceau de Salon," a humorous and charming tour-de-force for oboe and piano. Spring and Forsyth will close the program with a duet by Robert Hutchinson. "Bird Suite" was inspired by the bebop tradition of making up new melodies over a standard chord progression.

"'Bird Suite' also draws on the common practice of quoting snippets of tunes that fit the chord progression, and the audience will hear many familiar melodies flying by at a fast pace throughout the piece," Spring said.

Prior to joining the NSU faculty in 2011, Forsyth served as oboist with the United States Army Field Band in Washington, D.C., where she also performed regularly throughout the United States with the Woodwind Ambassadors Quintet. She previously held the position of solo English horn with the West Virginia Symphony Orchestra.

She is principal oboe of the Rapides Symphony Orchestra in Alexandria, Louisiana, and second oboe with the Texarkana Symphony. She performs regularly with the Shreveport Symphony as well as other orchestras throughout Louisiana and Texas. She is a founding member of the Three Reeds Duo with husband and saxophonist Paul Forsyth. Three Reeds performs throughout the world, building a repertoire ranging from baroque and classical transcriptions to contemporary and newly commissioned works.