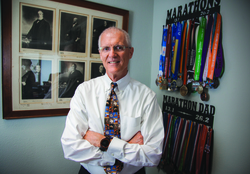 Tom Mason, who graduated from SFA in 1970, has completed all the World Marathon Majors and is now on a mission to participate in a marathon on every continent.

Tom Mason's hobby has taken him around the world, and it has taught him that the most meaningful run might not be the one that takes him farthest from home.

Mason, who earned a degree in mathematics and general business from SFA in 1970 and a CPA license in 1973, began running in 1974 to prepare for a trip to climb Mount Rainier with one of his fraternity brothers. The climbing trip came and went, but the running stuck with Mason. He decided to step up his game when he turned 60 and began training as a marathon runner. He ran his first marathon in November 2008 and has now completed 23 marathons.

Two years ago, the Dallas resident set a goal to complete all the World Marathon Majors, seven of the largest and best-known races in the world, including the Boston, Paris, London and Berlin Marathons. With that goal attained, Mason is near the halfway point in his next quest - to participate in a marathon on every continent.

Along with his son Lee, Mason ran his first marathon outside of the United States in Paris in spring 2013. "I had never been to Paris, so my wife and I rented a house about a mile away from the Arc de Triomphe, and we all stayed for 10 days," he explained.

In September 2013, Mason ran in the Berlin Marathon and then went with a group to Munich for Oktoberfest. "We toured the Dachau concentration camps outside Munich and just got a thorough immersion into the country."

The next stop on Mason's international race itinerary was England for the April 2014 London Marathon. "The race starts in Greenwich Park and winds along the Thames River, crossing the Tower of London Bridge at the halfway point," Mason recalled. "The finish line is on the Mall in front of Buckingham Palace, where the ceremonial processions always take place. It was just a great setting."

Tokyo was the most recent stop. After the February 2015 Tokyo Marathon, Mason and his wife took a bullet train to Kyoto and visited the Shogun Palace and Mount Fuji. "Finishing a marathon is an accomplishment, but marathons in locations like these are just invigorating and inspirational."

In order to qualify for certain marathons, runners must meet standards based on age and completion times of other certified marathons. Other athletes run to raise money for non-profit organizations. In the 2014 Boston Marathon, for example, more than $38.4 million was raised for associated charitable organizations.

The minimum charitable contribution for many marathons is $500, but for the historical Boston Marathon, the oldest race in America, the minimum contribution is $5,000. "I had never asked anyone to support my marathons, but I decided to send an email to some close friends and family members to see if I could get a few donations. I decided it made sense to ask my boss, and he wrote a check to cover the entire minimum."

Mason is executive vice president and treasurer at Hillwood, one of the top industrial, commercial and residential real estate developers in the country, and his boss is company founder Ross Perot Jr. "I ended up raising $17,000, and with the matching contributions that were offered by several companies, the total donation was $26,000."

That amount was just a portion of the $350,000 raised during the event by 40 runners supporting Massachusetts General Hospital's emergency response team. "This emergency response program was one of the early responders to provide critical trauma care to victims of the Boston Marathon bombings in 2013," Mason said. "Through their teamwork and preparation, they were able to respond to critical injuries sustained by runners and spectators with no loss of life at the hospital following that tragedy. It was an honor to help build and support the work they do."

The Boston Marathon is held on Patriots' Day, a statewide, celebration-filled holiday, and the 2015 race was the 119th running of the 26.2-mile course. "It was misty and cold, with temperatures in the low 40s," Mason said. "The crowds were deep at many points along the course, but when we got to Boston College, the students were lined up for a quarter of a mile, cheering and encouraging each runner. The patriotism surrounding the entire event was really special, and that race by far is the one that I cherish most highly. It was an incredible experience."

As any good accountant would, Mason documents the completion of each run, as well as other pertinent details, on a spreadsheet, and he believes that the time he invests in running is beneficial on both a personal and professional level. "Running helps me stay in shape, but the benefits aren't just physical. I do some of my best thinking when I am running."

Mason estimates that it will take approximately two years to attain his membership in the Seven Continent Club. "I contacted Marathon Tours, the company that arranges the travel, about the annual marathons they host in Antarctica each March, and they said they could guarantee me a spot in 2018, but the marathons for the next two years were already booked up. So, I'm on the waiting list."

While he's waiting, Mason is busy training and counting the days until Cuba's Havana Marathon in November 2015 and the Amazing Maasai Marathon in Africa in August 2016. 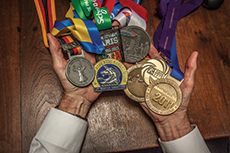