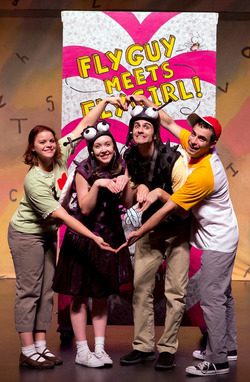 NACOGDOCHES, Texas - The Stephen F. Austin State University College of Fine Arts and the Children's Performing Arts Series have announced the fun and exciting shows that will make up the 2015-2016 CPAS season.

"The Children's Performing Arts Series is committed to bringing the finest in affordable professional companies to East Texas young people and their teachers," said Diane Peterson, manager of the SFA Fine Arts Box Office and director of the series. "In the spotlight for the 2015-2016 season are five exciting national touring productions designed to educate and entertain a variety of age groups."

The new season begins with "Fly Guy & Other Stories" on Friday, Oct. 16. In this Theatreworks USA production, seven delightful stories come to life in this musical revue based on popular children's books, including "Fly Guy Meets Fly Girl," "Diary of a Worm," "Fluffy the Classroom Guinea Pig," "Horace & Morris but Mostly Dolores" and others. Performed by a multi-racial cast, the stories represent various issues, themes and ideas relevant to a broad and diverse audience of children. Stories are subject to change. The show targets children in prekindergarten through fifth grades.

Perfectly timed for the 2016 election year, "Kids for President" comes to SFA on Friday, Dec. 4. Combining whimsy and political thought, this show, presented by Child's Play Touring Theatre, is backed up by live music, colorful costumes and backdrops based on children's artwork. Running the gamut from silly to serious, with suggestions for improving the world and kids' own ideas on what it's like to be the President, this performance wins the hearts and votes of both children and adults. Comprised of several short plays and songs adapted from children's writings, the show, which targets children in kindergarten through eighth grades, captures kids' curiosity and excitement about the election process.

The widely popular children's favorite "The Lightning Thief" returns to Turner stage on Friday, Feb. 5. In this Theatreworks USA production targeting children in second through eighth grades, Percy Jackson is about to be kicked out of boarding school … again. And that's the least of his troubles. Lately, mythological monsters and the gods of Mount Olympus seem to be walking straight out of the pages of Percy's Greek mythology textbook and into his life.

Rounding out the season is the magical "Rumpelstiltskin," on Friday, April 15. In this show targeting prekindergarten through third grade students, Daisy can spin gold from straw. A greedy king locks her in a stable and demands that she turn all the straw into gold. Daisy looks doomed until a strange little man, Rumpelstiltskin, appears and promises to spin the straw into gold in return for her necklace. The king is delighted but locks her up again - wanting twice as much straw to spin. Will the magical Rumpelstiltskin return to help Daisy? Find out as The Panto Company USA spins this classic tale into a golden show for children of all ages, filled with songs and audience participation.

"CPAS shows are a great way to supplement class curriculums, and our in-depth study guides provide suggestions for pre- and post-performance activities and discussions," Peterson said.