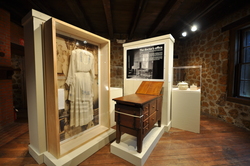 An examination table and a nurse's uniform are on display Thursday, Oct. 1, through Sunday, Dec. 20, at the "Misery and Remedy: The Rise and Eradication of Epidemic Diseases in East Texas" exhibit at Stephen F. Austin State University's Stone Fort Museum.

NACOGDOCHES, Texas - A historian and a medical doctor will give presentations during the opening reception of an exhibit on epidemic diseases of the 19th and early 20th centuries from 5 to 7:30 p.m. Thursday, Oct. 1, at the Stone Fort Museum on the Stephen F. Austin State University campus.

"Misery and Remedy: The Rise and Eradication of Epidemic Diseases in East Texas" features more than 150 artifacts from 23 institutional and private lenders from throughout East Texas, which will remain on display through Dec. 20.

Dr. Robert Carroll, a retired Nacogdoches physician, who loaned many artifacts to the exhibit, will present a collector's walkthrough of the items, which include furniture, tools and early pharmaceuticals.

Carroll has amassed more than 1,000 pieces of historical medical equipment and more than 250 medical books, and the artifacts on loan illustrate the medical advancements made during the past 150 years.

Historian Melissa Prycer, executive director of the Dallas Heritage Village, will present "The Hectic Flush: The Fiction and Reality of Consumption."

Consumption, which is now known as tuberculosis, was the leading cause of death in the 19th century. The slow disease process captured imaginations, and it often was the subject of art and literature.

Prycer will focus on author L.M. Montgomery, best known for "Anne of Green Gables," and she will discuss the gradual change of perception of the disease.

"The 'Misery and Remedy' exhibit is an example of the museum's dedication to telling regional stories that connect to national themes," said museum director Carolyn Spears. "An epidemic is a big story that plays out in small places and connects everyone through personal struggle, scientific breakthroughs and homegrown innovations."

In addition to tuberculosis, the exhibit also examines the early treatments and remedies of the epidemics of small pox, cholera, yellow fever, Spanish influenza and polio through the mid-20th century.

The exhibit will remain on display from 9 a.m. to 5 p.m. Tuesday through Saturday, 1 to 5 p.m. Sunday and closed on university holidays. Admission is free.

For information on the reception, presentations or exhibit, call (936) 468-2408, email stonefort@sfasu.edu or visit www.sfasu.edu/stonefort.