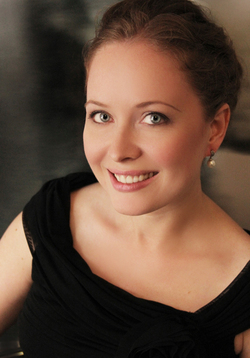 "The Pianist as a Rock Star" features virtuosic composers for the piano and highlights the music of such greats as Franz Liszt, Enrique Granados and Alexina Louie.

"Often referred to as the greatest pianist that ever lived, Liszt was a legend in his time, the 19th century equivalent of a rock star," Fehlauer said.

Liszt was considered the father of modern piano technique and also a prolific composer, according to Fehlauer.

"He forever raised the standards of what the piano is capable of," she said. "The composers who followed him tended to borrow or appropriate his virtuosic style in various ways. Virtuosic Lisztian technique can be seen in the compositions of Granados (Spanish), Alexander Scriabin (Russian) and Louie (Canadian)."

Her program at SFA will feature "Reminiscences de Norma" by Liszt, "Coloquio en la reja" and "El fandango de candil," which are two pieces from the piano suite "Goyescas" by Granados, and "Scenes from a Jade Terrace," by Louie.

"Louie is a Chinese-Canadian composer who tries to innovatively push the piano's technical capabilities even past those developed by Liszt, using techniques such as playing on the strings inside the piano," Fehlauer said. "'Jade Terrace' combines Eastern and Western musical styles, and is a wonderful example of how contemporary composers continue to push the boundaries of piano technique."

Liszt's transcription of the opera "Norma" by Bellini "shows off everything that Liszt loved: hummable melodies, the drama of Italian opera, and show-stopping piano technique with thundering octaves, "three-handed" technique (so called because a 19th century critic remarked that this passage was impossible to play without three hands), and huge leaps," Fehlauer said.