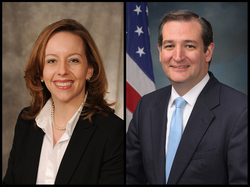 Cruz was elected in 2012 as the 34th U.S. senator from Texas. The son of a Cuban immigrant, Cruz's first-hand observation of the pursuit of freedom and opportunity in America inspired him to become a passionate fighter for limited government, economic growth and the Constitution. He graduated with honors from both Princeton University and Harvard Law School.

Cooper, an associate professor of history, earned her bachelor's degree from Angelo State University, master's degree from Texas Tech University, and doctorate and graduate certificate in women's studies from Texas Christian University. She is a past recipient of an SFA Teaching Excellence Award and recently was elected president of the Texas Council of Faculty Senates.

Cooper's publications include several articles and a co-edited book, "Transatlantic Relations and Modern Diplomacy." Forthcoming works include a second co-edited work, "Motherhood and War: International Perspectives," and "Informal Ambassadors: American Women, Transatlantic Marriages and Anglo-American Relations 1865-1945." Cooper has presented more than a dozen papers at national and international conferences, including venues in Canada, The Netherlands, England, Germany and Austria.

Commencement exercises will be split into two ceremonies. Cooper will provide the commencement address at the 9:30 a.m. ceremony, and Cruz will speak at the 2 p.m. ceremony.