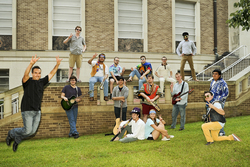 The Rockin' Axes will pay tribute to the music of The Beatles in this first concert, according to Andrew Sperandeo, adjunct faculty member in the School of Music and director of the Rockin' Axes.

"This is the inaugural semester of these ensembles," Sperandeo said. "We've reached a point in which the study of music at the university level can and does go beyond traditional areas and genres of music. The goal of such an ensemble and program is to attract students who see the benefit of being a truly well-rounded musician."

Sperandeo sees today's music student as not only wanting to be able to play many styles well on their instrument, but also wanting to have a deeper understanding and appreciation for other important elements of music and the industry as it currently exists, including sound recording and the business side of being successful in this industry, he explained.

"As the industry evolves, so should the student and the education he/she receives in order to be truly prepared for whatever experiences might befall them when they graduate," he said.

Music of The Beatles was chosen as this semester's concert program because 2014 is the 50th anniversary of the English rock band's "U.S. Invasion," Sperandeo said.

"And, they're considered one of the most influential groups on popular music over the last 50 years," he said. "Patrons will get to experience the sights and sounds of one of the greatest rock n' roll groups of all time being performed by the two Rockin' Axes ensembles. The arrangements tie in the traditional 'Beatles sound' with some more contemporary styles and textures."

The music of Elvis Presley was selected for next semester's Rockin' Axes concert because Elvis is considered the "King Of Rock n' Roll" and, similarly, has influenced a great number of musicians and styles of music to date, Sperandeo said.