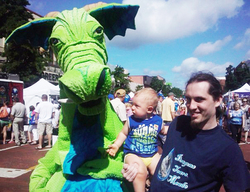 Gabriel and Michael Akers visit with the SFA School of Theatre's popular dragon character, Schlaftnicht, at a previous Blueberry Festival in downtown Nacogdoches.

NACOGDOCHES, TEXAS - Students in the Stephen F. Austin State University School of Theatre will add another element of excitement to all the fun those attending the Texas Blueberry Festival will experience June 14 in downtown Nacogdoches.

Theatre students will appear in costumes portraying popular characters from fairy tales and children's stories. Children (and adults) will have the opportunity to talk with the students and take photos with them, according to Angela Bacarisse, professor of design and arts management at SFA. The School of Theatre's trademark dragon character, Schlaftnicht, from the children's show "Trudi and the Minstrel," performed the summer of 2005, will make his annual Blueberry Festival appearance.

The students perform at the Blueberry Festival each year to "let the community know that the SFA School of Theatre offers good quality family entertainment at affordable prices to our neighbors in Nacogdoches," according to Bacarisse. Discount coupons for the SummerStage Festival will be distributed that day.

The costumed characters can be seen in front of The Cole Art Center @ The Old Opera House at 329 E. Main St.

"We have a lot of fun just dressing up and seeing how excited the kids are when they see us and get to talk to their favorite characters," Bacarisse said.

For performance times and ticketing information for the SummerStage Festival, visit www.finearts.sfasu.edu or call (936) 468-6407 or (888) 240-ARTS. All performances are in W.M. Turner Auditorium in the Griffith Fine Arts Building on the SFA campus.