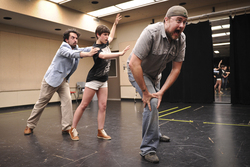 Rehearsing combat choreography for the scuffle in the Maycomb town jail in "To Kill A Mockingbird" are SFA theatre students, from left, Joshua Wallace, senior from Van as Atticus Finch; Bianca Stein, senior from Brenham as Scout Finch; and Bruce Moran, sophomore from Lake Jackson as a lynch mob member.

NACOGDOCHES, Texas - From late May through the end of June each year, Stephen F. Austin State University theatre students rehearse seven afternoons and evenings a week in addition to preparing scenery, lights, costumes, makeup, sound, props and more in the mornings and afternoons Monday through Friday.

That fast-pace immersion in all that is theatre can only mean that it's time for the SFA School of Theatre's SummerStage Festival. And this year's selections are sure to please audiences of all ages: Lewis Carroll's "Alice in Wonderland," adapted by Anne Coulter Martens, and Harper Lee's "To Kill a Mockingbird," adapted by Christopher Sergel. The festival runs June 27 through July 18.

"Audiences for our summer shows have grown enormously over the past few years," Shattuck said. "Parents and summer programs for kids discovered our children's productions, and families and friends flocked to popular plays such as 'Steel Magnolias' and musicals like 'Godspell.'

"But we want to welcome even more people who may not realize yet how fun our shows really are," he said. "What we do is storytelling - it's entertainment, it's songs and humor and suspense, and it's a blast. Come as you are! This isn't stuffy or scary. It's as easy and enjoyable as going to a movie or listening to some favorite music at a comfortable local hangout. Hopefully the new name conveys that sense of informality and fun."

Shattuck asked "two dynamic young directors" to suggest titles that would appeal to the Nacogdoches community, and they came up with "all-time favorite stories that are as irresistible as anything we've ever offered."

Laura Rikard, assistant professor of theatre at SFA, whose production of "Charlotte's Web" set the school's all-time summer attendance record last year, returns with Carroll's "Alice in Wonderland," as delightful a tale as any that has enchanted kids through the ages. And Zach Hanks, also assistant professor of theatre who's making his SFA stage-directing debut, proposed the dramatization of Lee's "To Kill a Mockingbird," a novel and Oscar-winning movie that's captivated American young people and their parents for generations.

"This is exactly what we want to offer in the SummerStage Festival - inviting stories that are sure to entrance and thrill just about everyone," Shattuck said.

Shattuck and his colleagues have been studying East Texas audiences' preferences and tweaking performance days and times to accommodate the community's varied schedules. Weekday matinee performances of the children's production are popular not only with daycare and school groups but also with retired grandparents looking for great things to do with kids when it's often too hot to play outside, Shattuck explained. The 6:30 p.m. curtain time for evening children's shows gets kids home for a reasonable bedtime, while the 7:30 p.m. curtain time for "To Kill a Mockingbird" provides time for a bite of dinner after work without getting grownups home too late, either.

"A few years ago, one dad mentioned to us that it was a little pricey for both parents to pay adult prices when taking their kids to the theatre, so we made it possible for everyone, regardless of age, to see the children's production at the student/youth price," he said. "We've strived to keep all of the tickets for both shows affordable, but to be sure our shows are accessible to the entire community, we've started experimenting with 'Pay-What-You-Can' performances. At these special shows, those who are able to pay full price for a ticket are asked to support our work by doing so, but those who can only pay a portion of that are equally welcome."

For the second year, the Nacogdoches Walmart has agreed to underwrite the costs of this year's "Pay-What-You-Can" shows, which include the June 28 performance of "To Kill A Mockingbird" and the 2 p.m. July 5 performance of "Alice In Wonderland."

The SummerStage Festival provides unique learning experiences for SFA theatre students, in addition to appealing opportunities for community members to attend live theatre in the summer. For a full month, theatre students rehearse daily in addition to working behind the scenes on the productions. Once the productions open at the end of June and beginning of July, students finally get some days off. But in addition to 16 performances over the course of four weeks, there are brush-up rehearsals and changeovers between the sets of the two plays that are running in rotation, Shattuck explained.

"The festival is a powerful educational opportunity for our students," he said, "but it also provides a more varied schedule for our local audiences to enjoy the stories we're bringing to life for them."

Shattuck described "Alice in Wonderland" as "a feast for kids' senses, with acrobatic movement to complement the wacky costumes and nonsense poetry favored by Carroll's colorful characters."

"It'll be just over an hour's worth of fast-paced fun," he said.

The humor and charm of the children at the center of "To Kill a Mockingbird" will guide the audience into the gripping and moving story of Atticus Finch and his heroic efforts for fairness.

"Around both shows we hope to create a true festival atmosphere - a refreshing destination that will make an ideal break from the summer sun," Shattuck said.

Both plays are produced by special arrangement with The Dramatic Publishing Company of Woodstock, Ill.

Patrons are encouraged to come an hour before curtain time for outdoor pre-show festivities, Shattuck said.

For tickets or more information, visit www.finearts.sfasu.edu or call (936) 468-6407 or (888) 240-ARTS. All performances are in W.M. Turner Auditorium in the Griffith Fine Arts Building on the SFA campus.