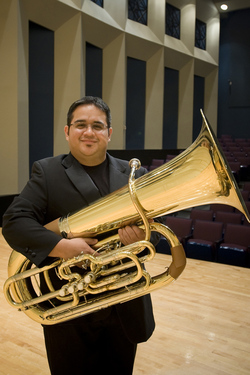 The program, titled Reformations," features the world premieres of two pieces for tuba, including "Reformations for Tuba and Percussion," composed by Salas' father-in-law, James R. Wright, and "Catacombs for Tuba and Recorded Track" by Jason K. Nitsch. Accompanying Salas for this program will be Brad Meyer, director of percussion studies at SFA, and pianist Geneva Fung, staff accompanist.

"I chose the title based on the type of repertoire programmed," Salas said. "The recital will feature the premiere of works for tuba in some of the newest mediums along with some other works not typically performed on tuba."

"Reformations for Tuba and Percussion" features three movements, each of which is named after members of Salas' family, including himself, his son, R.J., and his wife, Kat.

"Catacombs for Tuba and Recorded Track" features the tuba in "a haunting setting, which is further expanded through the use of recorded sound effects," Salas said.

The program also features "Onkonkle y Trompa" by jazz bassist Jaco Pastorius. Transcribed from Pastorius' debut album, the arrangement will feature Salas performing on both electric bass and tuba through the use of effects pedals, along with Meyer on the ethnic percussion.

This concert will be the opening event for SFA's ninth annual Octubafest, according to Salas.

"Each October, universities around the world celebrate the tuba and euphonium through events involving solo recitals, student performances and tuba-euphonium ensemble performances," he said. "SFA joined in this tradition in the fall of 2006."