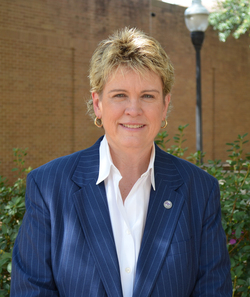 The annual induction ceremony provides an opportunity for the chapter to honor an individual who has achieved distinction in business and administration and who possesses the qualities fostered by Beta Gamma Sigma, the international honor society serving business programs accredited by AACSB International - The Association to Advance Collegiate Schools of Business.

Richardson will present the keynote address before she is inducted as a member of the organization along with 33 students and two faculty members. Membership in Beta Gamma Sigma is the highest recognition one can receive in a business program accredited by AACB International.

Based in Dallas, Richardson manages four business development officers, who cover the entire United States, and also is responsible for managing cross-sell for GFI-U.S. GFI is a relationship-focused business that provides products and services to financial institutions that use credit, trade, international payments, foreign exchange, financial risk management, corporate trust, and treasury and investment management services.

Richardson joined Wells Fargo in 1995 and has held positions in correspondent banking as a relationship manager, area manager, division manager and regional head of the Eastern U.S. Before accepting her current role, she managed 12 offices covering the eastern half of the United States. Prior to joining Wells Fargo, she spent five years at BNY Mellon in Pittsburgh in global cash management. She also spent seven years at Bank of America in Dallas working in treasury management and correspondent banking.

Richardson holds a bachelor's degree in business administration from SFA and is a member of the Executive Committee for the Executive Advisory Board of the Nelson Rusche College of Business. She also is a founding member of the Team Hope Chapter in Dallas for the Pancreatic Cancer Action Network and served as the chapter's coordinator for two years.

While in Pittsburgh and as a representative of BNY Mellon, she managed a Big Brother/Big Sister program with an inner-city public school. In 2013, Richardson was appointed to the Board of Communities in Schools of the Dallas Region.

The Beta Gamma Sigma induction event will be held at 3 p.m. Wednesday in Regents' Suite A of the Baker Pattillo Student Center on the SFA campus. For more information, contact the Office of the Dean at (936) 468-3101.