Screening of "Holes In My Shoes" planned at Cole Art Center 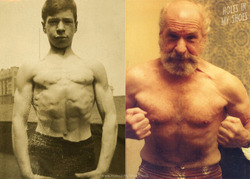 A free screening of the award-winning documentary "Holes In My Shoes" will be at 7 p.m. Friday, Nov. 7, in The Cole Art Center in downtown Nacogdoches as part of the SFA School of Art's monthly Friday Night Film Series.

NACOGDOCHES, Texas - The Stephen F. Austin State University School of Art and the Friends of the Visual Arts will present a free, one-night screening of "Holes In My Shoes" at 7 p.m. Friday, Nov. 7, in The Cole Art Center @ The Old Opera House in downtown Nacogdoches.

"Holes In My Shoes" is an award-winning documentary feature film directed by David Wachs that chronicles the life of Jack Beers, known as "New York City's Strongest Boy," from his birth in 1910 up to age 94.

Beers grew up in extreme poverty in New York's Lower East Side where he and his siblings took jobs as children to help support their family. Known as a trained strongman and self-taught structural engineer working on many well-known New York City buildings, Beers is credited with building Radio City Music Hall, putting the spire on the Empire State Building, training show boxers and acting in more than 200 films, according to information at holesinmyshoes.com. Beers died of natural causes just before his 99th birthday.