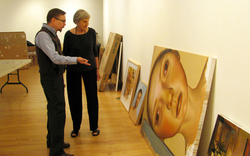 John Handley, SFA galleries director, confers with Eloise Adams, former galleries director, regarding the entries to be included in 2014 Texas National, which opens Saturday, April 12, in Cole Art Center in downtown Nacogdoches. Texas National celebrates its 20th year, and this year's event coincides with an opening of an exhibition of paintings and drawings by Jerome Witkin, this year's juror.

"We are very honored to have a juror of such stature as Mr. Witkin for the 20th anniversary of the Texas National," said John Handley, director of SFA galleries. "The art critic Kenneth Baker has said of Mr. Witkin that his only peer was the British painter Lucian Freud. That's quite a compliment."

A highlight of the April 12 opening of Texas National 2014 will be the simultaneous opening of an exhibition of Witkin's own works, both in The Cole Art Center @ The Old Opera House, 329 E. Main St., downtown Nacogdoches.

"Witkin's exhibition demonstrates why he is so critically acclaimed," Handley said. "His art is not for the faint of heart. Although he renders in pencil and paint as skillfully and theatrically as Caravaggio or Rembrandt - he is a modern master of drama and light - his work often carries the blunt force of a wartime journalist or a tabloid reporter."

Two special events are planned prior to the exhibitions' openings. On Friday evening, April 11, a 20th anniversary fundraiser party is planned, according to Handley.

"Attendees will be treated to a fantastic spread of food and drink, as well as performances by master magician Rodney Roberts and singer/songwriters Brad Maule and New York City's Monica Passin," he said. Tickets for this event are $85 single or $150 per couple and can be purchased through SFA's Fine Arts Box Office at (936) 468-6407. Proceeds from this event go toward continuing to bring important contemporary art and artists to East Texas. The party is at 6:30 p.m. at Karon Gillespie's El Atascossa Ranch.

On Saturday, April 12, Los Angeles art dealer Jack Rutberg will interview Witkin at 5 p.m. in Morning Glory Yoga Studio, 207. E. Main St., which is a block west of the art center. The Witkin exhibition has been provided courtesy of Jack Rutberg Fine Arts. Texas National 2014 and "Jerome Witkin: Paintings and Drawings" will open with a reception at 6 p.m. in the art center. Texas National Winners will be announced at this reception.

The exhibition and competition

Texas National is a joint presentation of the SFA College of Fine Arts and School of Art and is sponsored in part by the SFA Friends of the Visual Arts and Nacogdoches Junior Forum.

SFA's annual juried competition and exhibition attracts entrants from across the nation, providing artists an opportunity to have their work juried by highly acclaimed artists and critics.

Eloise Adams, a former SFA gallery director and creator of Texas National, is especially proud to see the event reach this 20-year milestone. She remains an active supporter of the event and the School of Art.

"It has given me great joy to work with SFA faculty and community volunteers in the production of this event," she said, adding that Texas National "gives us national recognition and the prestige of presenting upscale, well-marketed competitions with famous jurors. Our students get hands-on experience helping produce the event, and we all have the opportunity to meet the juror."

An exhibition of Witkin's work was presented in Griffith Gallery in 1990, "and we welcome him again," Adams said.

"He is a major artist, and we appreciate his gift of time," she said. "It will be exciting to have him in town for the second time."

Witkin is revered for his "penetrating psychological portraits and haunting political narratives," according to information at openfiguredrawing.com. Both an artist and teacher, his first job was at Maryland Institute's College of Art in Baltimore in 1961. Since then has held teaching positions and been appointed as visiting artist at many universities, among them Manchester College of Art, Manchester, England; American College of Switzerland, Leysin; National Academy of Design, New York, N.Y., and Syracuse University School of Art, N.Y., where he has taught since 1971.

Texas National 2014 features the work of 47 artists from 20 states. More than 1,000 entries were received for this year's competition.

The Ledbetter Gallery in Cole Art Center will house the Texas National exhibition, while the upstairs Reavley Gallery will showcase Witkin's exhibition. Both exhibitions will be displayed through June 14.