The King's Singers to perform at SFA 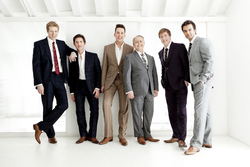 The King's Singers will perform at 7:30 p.m. Thursday, Feb. 6, in W.M. Turner Auditorium on the SFA campus.

NACOGDOCHES, Texas - The King's Singers, one of the world's most celebrated vocal ensembles, will perform at 7:30 p.m. Thursday, Feb. 6, in W.M. Turner Auditorium on the campus of Stephen F. Austin State University.

The group's appearance in Nacogdoches is a feature of the SFA College of Fine Arts' University Series, "Live Out Loud."

It's been more than four decades since six choral scholars at King's College Cambridge formed an all-male a cappella group, little knowing they would one day redefine the genre. The group has a packed schedule of concerts, recordings, media appearances and education work spanning the globe. The group is instantly recognized for spot-on intonation, impeccable vocal blend, flawless articulation of the text and incisive timing, according to John W. Goodall, associate dean of the College of Fine Arts.

"During their 2013-2014 concert season, The King's Singers will perform throughout the United States, Europe, Asia and Australia in some of the world's most famous venues," Goodall said. "It is a privilege to bring to them to Nacogdoches and SFA as part of our University Series."

Launched at the Royal Albert Hall (London), new studio recording and live performance project "Great American Songbook," which will be performed at SFA, includes 17 new arrangements written specifically for the group. With a discography of more than 150 recordings, the group's contribution to classical recording was recognized when they were selected to join the Gramophone Hall of Fame in June 2013, marking their influence and inspiration across the years. The King's Singers are double Grammy award-winning artists.

"There are over two million pieces of sheet music published by The King's Singers in circulation," Goodall said. "Their arrangements are sung the world over by school and college choirs and by amateur and professional ensembles."

Prior to the concert, there will be a 7 p.m. informative talk about the artists and their music to be presented by Dr. Tim King, director of choral activities at SFA, in Griffith Gallery located across the hall from Turner Auditorium. The audience is invited back to the gallery for a post-performance reception to meet the performers and to honor the event's corporate sponsor, Lehmann Eye Center.