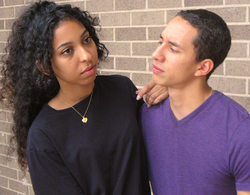 NACOGDOCHES, Texas - The student actors in "Trojan Barbie" bring global, multicultural perspectives that are as varied as the play itself to the Stephen F. Austin State University School of Theatre's Mainstage Series.

In "Trojan Barbie," Australian playwright Christine Evans' award-winning drama, the past collides with the present as the owner of an English doll hospital somehow finds herself face to face with survivors of the Trojan War, fought 3,000 years ago in Asia Minor, now known as Turkey.

Helping to tell this story on stage is an eclectic cast of student performers with diverse and interesting backgrounds, according to Rick Jones, professor of theatre at SFA and director of "Trojan Barbie."

Two exchange students from London's Rose Bruford College of Theatre and Performance, Scarlett O'Reilly and Hana Ghassali-Sbai, have major roles. "They are both English and Hana has a Brazilian heritage," Jones said.

Another important character is played by Malena Gordo, an SFA student from Argentina "who also happens to play first singles for the SFA tennis team," according to Jones. Yet another cast member, Sarah Hendrix, also lived in England for three years.

Mainstage veterans Nnamdi Nwankwo and Joshua Lopez bring their performance skills to the cast along with freshman Anais Saenz and a new transfer student, Richard Scott. "Demographically, Nnamdi and Rich are African-Americans, and Josh and Anais are Latino/Latina," Jones said.

"It's an interesting assortment: partly because of the demands of the script (which requires, for example, that characters Max and Talthybius be black and that Jorge be Latino), partly because a more diverse cast works well with my concept for this show, and partly because the actors who did the best work in auditions happened to be ethnically mixed."

Directors in the School of Theatre are focused on providing good roles for students, regardless of demographics, Jones explained. Nwankwo, for example, has been in a number of shows at SFA, but "Trojan Barbie" is the first one in which the character he plays is specifically written as a black man.

The need for various dialects poses some related challenges for the production. "Scarlett keeps her accent for the play, and Nnamdi has had a lot of exposure to the Nigerian accent he uses in the show because of family connections. But Hana has to sound American to blend in with the rest of the cast, and Josh plays one character who is stereotypically British," Jones explained. "Helen (of Troy) needs to be exotic, so it's fine that Malena, who plays that role, doesn't sound like she grew up in America."

Lopez, who plays several characters, one of which is Jorge, believes his Latin heritage helps him to better construct movements and mannerisms of this particular character.

"Bringing Latin flavor to such a character is less difficult to do," he said. "Regarding the other characters that I portray, the overall sternness and discipline that my parents instilled within me is what forces me to give myself to each character and scene."

But Lopez also finds portraying Jorge's character difficult in a different way, "especially since his way of interacting with women curdles my stomach," he said.

"As an actor, I have to be able to relate to his thoughts and understand why it is he thinks a certain way," he said. "Playing a person who is down right despicable while still being able to wear his ideals as my own is the most difficult aspect of this role."

Ghassali-Sbai believes her childhood in South London gives her insight into her character and the tumultuous world in which she lives.

"Growing up in South London, I can relate to feeling like I live in a world of chaos," she said, "but I still want to make something good, something that matters."

But even with her background, fully understanding her character is still difficult.

"I think the challenge is keeping in consideration all the history and also trying to understand the mindset of a 15-year-old girl who has been thrown into an awful situation," she said. "The scene not only becomes challenging for the actor, but also for the spectator, too."

Differences in educational background make the production process even more intriguing. The exchange students in the cast of "Trojan Barbie," who are working toward a degree in American Theatre Arts (ATA) at Rose Bruford College, come from a completely different system of actor training than the American students.

"I hope I'm teaching everyone in the cast," Jones said. "And the less experienced actors are always watching those who are a little further advanced in their training. But the ATAs can do things our regular students can't, and vice versa. So the opportunities to learn from each other are more highlighted, both in rehearsal and in conversation in the student lounge or over a cup of coffee."

Even the student staff working behind the scenes has an international flavor. "The assistant director, April Gore, is Welsh and the stage manager, Monika Zimmermann, has lived in Scotland and Dubai and went to high school in Singapore," according to Jones.

"Trojan Barbie" will be presented at 7:30 nightly Tuesday through Saturday, Oct. 7 through 11, in W.M. Turner Auditorium in the Griffith Fine Arts Building.

The play is recommended for mature audiences, and a content advisory is available at theatre.sfasu.edu. "Trojan Barbie" is presented by special arrangement with Samuel French, Inc.