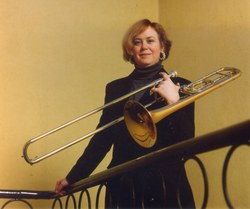 NACOGDOCHES, TEXAS - World-famous trombonist Abbie Conant will bring her 600-pound quadraphonic sound system to the campus of Stephen F. Austin State University when she performs in concert at 7:30 p.m. Monday, March 25, in the newly refurbished Music Recital Hall in the Wright Music Building.

The concert, in which Conant and her husband, William Osborne, celebrate Women's History Month, is a joint presentation of the SFA College of Fine Arts, School of Music and Cole Performing Arts Series.

The subject of a chapter in journalist and author Malcolm Gladwell's New York Times Bestseller, "Blink," Conant will also participate in the International Views on Gender roundtable discussion on campus scheduled for 6 p.m. Tuesday, March 26, in LAN 142, during which time the roles of men and women in different societies and cultures will be discussed.

"My students and I are very excited to work with a trombonist of this caliber," said Deb Scott, associate professor of trombone at SFA. "Over the course of several days, she will teach many lessons and masterclasses for us. She is a very creative performer who incorporates theater in her music. It is rare to see this kind of performer in Nacogdoches."

For the Monday night concert, Conant and Osborne will present their 2013 spring tour of internationally celebrated multi-media work, "Music for the End of Time," which showcases concert-length work for trombone, video and quadraphonic electronics whose six movements are based on St. John the Devine's Book of Revelation.

"Our goal has been to explore the new dimensions of performance art and create substantial, meaningful works for the trombone," according to Conant.

Conant, professor of trombone in Staatliche Hochschule fuer Musik in Cologne, Germany, received her bachelor's degree from Temple University, studied at Yale University and then received her master's degree from the Juilliard School and a master diploma from the Staatliche Hochschule fuer Musik. She has been solo trombonist for the Royal Opera in Turin, Italy, and for the Munich Philharmonic. The International Trombone Association described her as being "in the first rank of world class trombonists."

Osborne, noted author and composer, is well known for his activism for women in music and has written many articles about the social and political influences of symphony orchestras. In 1998, he was recognized by the International Alliance for Women in Music for his services to women in music.

Conant and Osborne have toured in more than 155 cities in America and Europe to great critical acclaim for Osborne's compositions.

Tuesday night's roundtable discussion, sponsored by the Gender Studies Program at SFA, will feature a number of other individuals in addition to the guest performers who will discuss international perspectives on gender. Among them are Sadia Cheema, graduate student from Pakistan, Fatime Karagama, undergraduate student from Cameroon, and David Rex-Galindo, assistant professor of history at SFA from Spain.

Tickets for the concert are $5 for adults, $4 for seniors and $2 for students. For tickets or more information, call the Fine Arts Box Office at (936) 468-6407 or visit www.finearts.sfasu.edu.