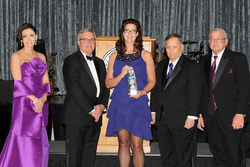 "We are very fortunate at SFA to have been the beneficiary of financial support from countless individuals and organizations throughout our 90-year history, but one could argue that there has been no better friend to our university than the T.L.L. Temple Foundation," said Dr. Baker Pattillo, SFA president. "It is fitting to honor the foundation at the Gala during this special 90th-anniversary year."

The T.L.L. Temple Foundation was established in 1962 by Georgie Temple Munz in honor of her father, Thomas Lewis Latané Temple, an East Texas lumberman and founder of Southern Pine Lumber Company, which later became Temple Industries. It is a nonprofit organization operated exclusively for charitable and educational purposes, primarily in areas of the deep East Texas pine timber belt.

The foundation has made grants in support of the arts, community and social services, environmental and conservation initiatives, and all levels of education. Funds to establish, improve and maintain public school and college libraries also have been primary beneficiaries, as well as hospitals and health care facilities. These gifts have significantly enhanced the quality of life for the people of East Texas.

For decades, SFA has been among the foundation's many beneficiaries. The foundation has provided funding for equipment, research, teaching, training and program support, as well as many scholarships and professorships that will benefit SFA students and faculty members in perpetuity. The university's forestry college is named the Arthur Temple College of Forestry and Agriculture in recognition of the longtime support of the late Arthur Temple, the Temple family and the foundation.

"The T.L.L. Temple Foundation has had an extraordinary impact on excellence in teaching, research and outreach programs in the Arthur Temple College of Forestry and Agriculture," according to Dr. Steven Bullard, dean of the college. "We can justifiably claim national prominence in key programs due to the support we have received, which was targeted specifically to achieve that prominence.

"Because of the endowed nature of the support from the T.L.L. Temple Foundation and from members of the Temple family, its impact will continue into the future," he said. "Their contribution has had such a significant impact that it has become part of the very DNA of the Arthur Temple College. We would not be nationally prominent without this support for faculty, students and programmatic excellence."