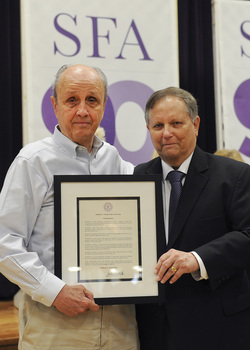 The president of Stephen F. Austin State University has proclaimed Thursday "William E. Arscott Day" on campus in honor of the cinematography program director's 50th year on the faculty. Arscott, left, is pictured with SFA President Baker Pattillo after the special day was announced at a Thursday meeting of the faculty and staff.

A proclamation announcing the special day was read during a meeting of the faculty and staff Thursday morning and was a surprise to the professor, who began teaching painting, ceramics and sculpture in 1963 and is the longest tenured faculty member at SFA.

"As director of the School of Art's renowned filmmaking program, Bill Arscott has taught, mentored, and positively influenced the lives, education, and careers of hundreds of SFA students," said Dr. Baker Pattillo, SFA president. "The proclamation is an expression of the SFA community's admiration, gratitude, and high regard for Bill Arscott and his 50 years of dedicated service to his students, his craft, the university, and the community."

Early in Arscott's career, he became well-known for teaching art appreciation classes using innovative methods to captivate and inspire his students. For more than three decades, he has led SFA's cinematography program, which is highly respected throughout the filmmaking industry. His professional accolades include being honored with a resolution in the Texas Senate, named a Distinguished Professor by the SFA Alumni Association and appointed Regents Professor by the SFA Board of Regents for the 1984-85 academic year.

In a recent interview, Arscott, a native of Nacogdoches, said it is his relationship with students that keeps him coming back to teach at SFA year after year.

"When I came to SFA, I was thinking of staying for two years," he said. "I keep teaching because I love my students. It is the most rewarding thing in the world to work with students to produce movies that are works of art - that say something and make people think."