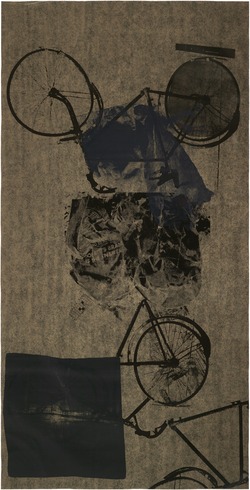 American artist Robert Rauschenberg's "Kitty Hawk" will be among the works displayed in "Robert Rauschenberg: Four Decades of Works on Paper" opening at 6 p.m. Tuesday, April 23, in Griffith Gallery in the Griffith Fine Arts Building. The play 'bobrauschenbergamerica" by Charles L. Mee opens at 7:30 p.m. the same night in W.M. Turner Auditorium as a production of the SFA School of Theatre.

NACOGDOCHES, TEXAS - A unique collaboration between the Stephen F. Austin State University Schools of Theatre and Art has resulted in a rare opportunity for East Texas patrons of the fine arts to simultaneously experience the opening nights of an art exhibition and a theatre performance involving the same subject.

"Robert Rauschenberg: Four Decades of Works on Paper" will open at 6 p.m. Tuesday, April 23, followed by the 7:30 p.m. opening performance of "bobrauschenbergamerica" by Charles L. Mee in W.M. Turner Auditorium. In between, there will be a 7 p.m. informative talk with SFA Galleries Director John Handley and SFA Assistant Professor of Theatre Jason Davids Scott discussing the exhibition and the play.

"bobrauschenberamerica" is a play that doesn't have a traditional story, according to Scott, the play's director. It's a series of scenes, monologues, musical numbers and other events that are inspired by the work of artist Robert Rauschenberg. A painter, sculptor, collage artist and theatre artist, Rauschenberg was "someone who defied easy labels and descriptions," Scott said.

"The play is a lot like that, in the best possible way," he said. "How do you describe the experience of riding a roller coaster or watching fireworks? That's kind of what this show is like."

In selecting this particular play, Scott said he wanted to do "something very modern and very American."

"I love the work of Charles Mee, the playwright, because he crafts very complicated characters and has a great gift for poetic language," he said. "For young performers, in particular, his work is a perfect challenge: everyone can relate to these characters, but it requires the actors to bring so much of their own personality to each part."

Mee is also "generous" in allowing companies to adapt and shape the work as they wish by adding elements, eliminating scenes and casting creatively, Scott explained.
"I liked the challenge of making this play something unique to SFA and our local audience," he said.

"I'd be happy to have audience members leave with a smile on their face and saying to themselves, 'I have no idea what just happened,'" Scott said. "I hope they will remember the experience of watching these scenes about an iconic and nostalgic America at its most glorious, most dark and most mundane.

"Robert Rauschenberg: Four Decades of Works on Paper" is an exhibition of 18 of the artist's creations offering an insightful cross-section of Rauschenberg's long and varied career, according to Handley.

"Known for blurring the boundaries between painting and sculpture, expressionism and pop art, the importance of printmaking is also revealed here in the remarkable consistency of his iconography over four decades," Handley writes in the show brochure.

"Nicknamed the 'enfant terrible' of the New York School, Rauschenberg struggled for many years to be taken seriously," Handley said. "His curiosity about the world and his unique perception of reality provided a never-ending source of inspiration, and through this approach, he came to see himself as a journalist-artist who sought to work in the gap between art and life."

In this role, Rauschenberg embraces the same idea as many of his contemporaries - that art should awaken one to reality. He came to prominence during a period of renewed confidence and prosperity following World War II, and the subjects of his prints referenced the mass media of consumerism, advertising, comics and film.

Rauschenberg's prints are "so dense with cultural references that a single meaning is difficult to arrive at," Handley said.

"The SFA School of Art is grateful to Bill Goldston, director of Universal Limited Art Editions, for the loan of these works of art," he added. "The exhibition was also made possible by a generous grant from the Ed and Gwen Cole Annuity Fund."

When Handley first arrived as the new galleries director for SFA last fall and learned that the School of Theatre would present Mee's "bobrauschenbergamerica" this spring, he began to "wonder if I could find somebody who could lend us some Rauschenbergs," he said.

"It took me a few months, but I succeeded," he said.

And the School of Theatre welcomed the idea of the collaboration, with all involved aware that the play and exhibition showing together could reach a larger audience than showing individually.

"The philosophy behind such ideas stems from my belief that the galleries exist for the entire university and not just the art department," Handley said. "Whenever a collaboration is possible, it widens the galleries' audience to include those who may never otherwise come to an art exhibition."

"We're very excited to be opening the show on the same night as the Rauschenberg exhibit in Griffith Gallery," he said, "and I'm grateful to gallery director John Handley and Dean (A.C.) Himes (College of Fine Arts) for bringing together the School of Art and School of Theatre in this fashion."

In the fall, The Cole Art Center @ The Old Opera House will host an exhibition of Day of the Dead altars, Handley said, adding he and Scott are already discussing another collaboration pertaining to this exhibit and a performance by the Fredonia Players.

"bobrauschenbergamerica," sponsored in part by Tipton Ford Lincoln, runs nightly through Saturday, April 27, at 7:30 p.m. It is recommended for mature audiences. Tickets for this Mainstage Series production are $12 for adults and $6 for seniors and students.

All exhibitions, receptions and gallery talks are free and open to the public.