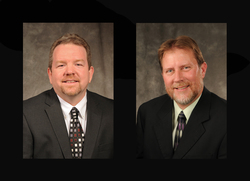 The faculty awards presented during the Gala recognize innovation and excellence in teaching and research. Dr. Dan Bruton, professor of physics and astronomy and associate dean of the College of Sciences and Mathematics, is the recipient of the 2013 Faculty Achievement Award for Teaching. Dr. Brian Oswald, Denman Professor of Fire Ecology, Silviculture and Agroforestry in the Arthur Temple College of Forestry and Agriculture, has earned the Faculty Achievement Award for Research.

Bruton has been part of the SFA faculty for more than 17 years, teaching physics, astronomy and engineering. He also serves as the pre-engineering adviser, acting as a mentor to the more than 60 pre-engineering students enrolled at SFA each year. In addition, he has been instrumental in efforts to bring a four-year degree program in engineering physics to the university.

"The journey from farm boy to physics professor was quite an adventure and was full of challenges," Bruton said. "Like many teachers, I use the experience gained in overcoming these challenges as a teaching tool in the classroom and during the advising process. I strive to inspire students to choose to do things that are difficult, such as science, technology, engineering and mathematics."

He emphasizes undergraduate research in his courses, leading senior-level astronomy classes in which students conduct research at the SFA Observatory. So far, Bruton and his students have discovered 11 asteroids wandering the solar system. Three of these minor planets have been named (one is called Sfasu), and three more are scheduled to be named soon.

"My training in physics has enabled me to teach other things that I love: astronomy and engineering," Bruton said. "I truly enjoy teaching students about the wonders of the universe and showing how the study of astronomy over thousands of years has affected our everyday lives."

"His quality teaching extends to every level of the curriculum, from the service courses to the graduate courses," Markworth said in his recommendation of Bruton. "He has been on the leading edge of using cooperative learning in the classroom."

Oswald joined the SFA faculty after teaching at Alabama A&M University. He was named the Hunt Distinguished Professor of Forestry in 2007 and was named SFA Regents Professor for the 2012-13 academic year.

Oswald has served for nine years on the Board of Directors for the Association for Fire Ecology and is currently president of that organization. In 2002, he was awarded the Carl A. Schenck Award for Outstanding Forestry Education by the Society of American Foresters.

Recently, Oswald was selected to conduct extensive research on wildfire issues in the wildland-urban interface in the Netherlands, assisting fire agencies with wildland fire management. This research led to the development of the first estimation of wildland fuels in the most wooded and hazardous region of that country and resulted in the publication of a forest fuels estimation guide.

"The Netherlands and most of Northwest Europe are experiencing increases in the number and size of wildland fires," he said. "This is occurring without the historical and social connection to wildland fire that exists in North America, and with almost no national expertise in wildland fire behavior prediction, fire weather and fuel assessment."

In his recommendation of Oswald for the research award, Dr. Steven Bullard, dean of the Arthur Temple College of Forestry and Agriculture, said the professor was instrumental in working with undergraduate students in fire ecology to receive the Firewise Communities designation of SFA, the first for a university in the United States.

"Dr. Oswald has an admirable record on completion of graduate students and assuring that their research reaches the broadest audiences through both refereed journals and technical papers," Bullard said. "He is dedicated to the field of forestry and has become an internationally recognized scholar in fire ecology."

The Gala cocktail reception begins at 6 p.m. and will be followed by a candlelight dinner at 7 p.m. Entertainment will be provided by Blind Date, featuring seven of Austin's most accomplished musicians. Known for its versatile repertoire, the group performs everything from dance music to rock, jazz, country and hip-hop.

Tickets are $175 for orchestra seating and $125 for ballroom seating. Proceeds from the Gala help build a permanent endowment created by the SFASU Foundation to honor faculty achievement. For more information or to purchase tickets, call April Smith at (936) 468-5406.