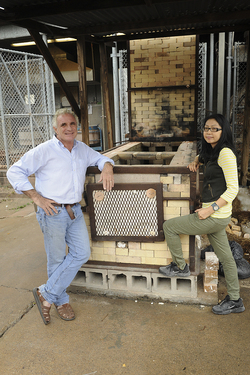 Piero Fenci, professor of ceramics in the SFA School of Art, will return in November to the state university of Chihuahua, Mexico, where he established a ceramics program more than a decade ago to present a week-long workshop with Maki Hajikano, right, SFA professor of sculpture.

NACOGDOCHES - The influence Stephen F. Austin State University and its School of Art has had on the ceramics program at La Universidad Autonoma de Chihuahua, Mexico, is obviously profound. Simply put, it likely would not exist today without the contributions of SFA Professor of Ceramics Piero Fenci.

Fenci was the driving force in founding the first program of contemporary ceramic art in northern Mexico. And the ceramics program at the university located just south of El Paso is now thriving. It has a new building and new state-of-the-art walk-in kilns, and an SFA graduate is the professor in charge.

But as much as Fenci influenced the positive direction the ceramics program would take, the students he worked with, the people he met and the culture he came to appreciate and embrace over the past decade continue to make a lasting impression on him today.

With the help of a grant, Fenci will return in November to the state university of Chihuahua to present a week-long workshop with Maki Hajikano, SFA professor of sculpture. Hajikano will focus on glass casting, and Fenci will continue the lecture series he began years ago on clay and glaze technology.

"I can't wait to return to Chihuahua in November," Fenci said. "I look forward to seeing the recent improvements to the area.

"The program I founded in Mexico has been a bright shining light at the end of my career," he said. "I have been given the opportunity to accomplish in another country - a developing country - the same thing I did here at SFA, and that was to build a program from virtually nothing. I've been able to go to Chihuahua almost every year to mentor the program, build kilns, lecture and demonstrate."


It was just 10 years ago that then SFA President Tito Guerrero laid the groundwork for an exchange program in various academic areas with La Universidad Autonoma de Chihuahua. The following year, in 2004, Fenci spent a month at the university lecturing and demonstrating as a visiting professor. Fenci was a logical match for the project. He majored in Latin American studies at Yale University, is fluent in Spanish and had conducted research in Mexico and Guatemala.

"What a trip that was," he said, adding he would like to some day write a book about the experience. "It was an intensive cram course in art using clay as a medium. They had a primitive sculpture area - the students were carving in stone. That was it.

"So I introduced them to clay body formulation, glaze calculation, kiln building, kiln firing and, of course, the basics of constructing ceramic vessels and sculpture," he said.

He describes that initial experience as "formative, and a revelation." No one spoke English except for two students who had spent time in the United States - one as a nanny in Michigan and the other as a student at the University of Texas in El Paso.

"The fact that two Mexican students who came to SFA are both tenure-track professors, running large ceramics programs, one in Mexico and the other in the states, is remarkable," Fenci said. "Of course, Adan and Kira are successful not because of me, but because they have the eye of the tiger and fire in the belly. All I did was get them to come to SFA; then I stayed out of their way. They are both as brilliant as they get. I can't believe the good luck of all this having happened. It's been a gift from Heaven, if indeed it exists."


Because of his work at the state university of Chihuahua, Fenci became the first American to be given the opportunity of presenting a one-person exhibition at the state museum of Chihuahua.

"That show was the highlight of my career," Fenci said. "The Texas Master Show two years ago in Houston is a close second."

He explains that he has learned much about the Mexican culture during his time in Chihuahua. There is a huge emphasis on family, an appreciation of art and "a formality and civility in Chihuahua that you don't find in the states," Fenci said.

"Artists are treated with much respect; the same with professors in universities," he said.

Hajikano is also looking forward to the trip and the experiences that will result. She conducted a workshop there three years ago. On the upcoming trip, she will talk about how the traditional process of casting has been utilized in contemporary art practice and address issues such as concept development, authorship and proprietary rights.

"It is an exciting opportunity for me to introduce the process I teach here at SFA to students in Mexico," Hajikano said. "I am interested in the elements of cross-cultural exploration and how the various aspects pertinent in cultural interactions, and the edifying exchanges that result, can occur through art."


Hope for the future


The violence in Mexico that disrupts the beauty of the land and its people weighs heavily on Fenci's mind. Some news accounts estimate that more than 100,000 civilians have lost their lives, mostly in northern Mexico, since the former president of Mexico declared a war on drugs several years ago.

For this reason, Fenci and Hajikano will be cautious when they return next month, but they are also very hopeful that the violence is beginning to subside and that the relationship between SFA and the university in Chihuahua will again flourish.

"In the future, I would like to be able to take students with me to do workshops and also have them do a semester abroad," Fenci said. "The problem has been the violence, but the belief is that things are getting much better, and I am hopeful. Mexico has a better economy than the U.S. right now.

"I'm looking forward to a rich cultural and educational exchange with northern Mexico," Fenci said, "and I really think it is possible once again."

Fenci recently learned that not only will he see Saenz during this visit, but Enriquez will also be at the university at the same time presenting a lecture.

"That will mean that my two Mexican success stories will be with me and Maki, all of us working together," he said. " That will be quite a terrific moment for me."