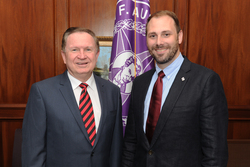 NACOGDOCHES, Texas - Dr. R. Tyler Spradley, assistant professor of communication studies at Stephen F. Austin State University, is the latest recipient of an endowed professorship established to reward faculty members who are excellent teachers and serve as mentors to their students.

The Jim Towns Mentoring Professorship recognizes professors who instill, foster and promote a mentoring culture at SFA. The award is named for Dr. Jim Towns, longtime professor of communication studies, and it is the only SFA professorship for which faculty members in all six academic colleges are eligible.

"It is an honor and joy to be recognized by my students and colleagues," Spradley said. "Dr. Towns has always been an inspiration for me, so few honors will compare to this one."

According to a former student in her recommendation of Spradley for the recognition, the professor "continually blessed my peers and me through his unique and heartfelt approach to relationship building in, as well as outside of, the classroom."

The funding for the mentoring professorship was largely raised by Towns with the help of many of his colleagues and former students. Faculty mentoring and reverse mentoring are among Towns' research interests, and he has successfully mentored countless students throughout his distinguished 47-year career at SFA.

"I really wanted to endow a professorship that would encourage mentoring relationships, which I think have benefitted me as much as my students over the years," Towns said.

"Students are drawn to Dr. Spradley and desire to emulate him both professionally and personally. He provides an excellent example of how mentoring relationships between students and faculty members can benefit both parties tremendously. He is most deserving of this recognition."