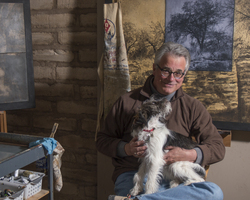 A scholarship has been established in honor of retired SFA art professor Robert Kinsell, shown here in his West Texas studio with companion Punkin.

NACOGDOCHES, Texas - The SFA Friends of the Visual Arts board has established a scholarship in honor of Robert Kinsell, retired Stephen F. Austin State University School of Art professor.

The Robert Kinsell Art Scholarship will be awarded annually to a junior, senior or graduate level art student with painting or photography as his or her major study area.

The first recipient will be nominated in February by the SFA School of Art faculty, and the Friends of the Visual Arts will present the award in the spring when other art scholarship winners are announced.

An art professor at SFA for 25 years before his retirement this past spring, Kinsell taught courses in painting, drawing, figure drawing and advertising design.

Before his retirement, Kinsell was a long-time active supporter of the mission of the SFA Friends of the Visual Arts, according to Linda Mock, chairwoman of the FVA Scholarship Committee.

"Bob could always be counted on to donate one or more pieces of his art work for all the fundraising events the FVA held for both establishing the Cole Art Center and for scholarships for students attending the School of Art," Mock said. "He was very well respected and admired by his students in his painting, drawing and advertising design classes."

Kinsell described having a scholarship established at SFA in his honor as "quite humbling."

"I greatly appreciate that the Friends of the Visual Arts think highly enough of my contributions to the school to have established it," he said. "I am hoping the scholarship will inspire serious and gifted students to fully embrace the challenges of a painting career and will help them discover the wonder of living as an artist. I hope that by alleviating some of the financial burden of studying painting, students will be encouraged to be ambitious and determined in their studies."

Kinsell earned a Bachelor of Arts from DePauw University in Greencastle, Ind., in 1973 majoring in art with a minor in philosophy/religion. Upon graduation, he worked briefly in a paint factory, Lackwerke Wulfing, in Wuppertal, (West) Germany. Returning to the U.S. in 1974, Kinsell moved to Chicago, eventually working at Frumkin Gallery. In 1977, he took a job in the mailroom of Benton & Bowles advertising agency and was promoted to art director six months later, working on accounts for AMF, Head Tennis, Harley Davidson and Bell & Howell. Over the next six years, he worked as art director at Tatham, Laird & Kudner and Foote, Cone & Belding, assigned to several national accounts at each agency. In 1982, Kinsell was accepted into the MFA program in painting at the University of Wisconsin/Madison and received that degree in 1985.

In 1988, under the encouragement of his wife, Judy Morgan, he applied for and was hired as an assistant professor in the art department at SFA with assignments in advertising design, drawing and painting. He was awarded tenure and was promoted to associate professor in 1995 and was promoted to full professor in 2004. Kinsell was appointed coordinator of the painting program in 2000. He received a College of Fine Arts research grant to study 3D modeling at Strata Studios in St. George, Utah, and was awarded two faculty development leaves.

Kinsell has exhibited his work in Houston, Fort Worth, Chicago, Ill., Scottsdale, Ariz., Bend, Org., Schenectady, N.Y., Dayton, Ohio, New Orleans, La., and Memphis, Tenn., in both commercial gallery venues and in academic settings, and he has executed several commissioned paintings for clients in Houston.

"The School of Art at SFA was my home as an artist for 25 years giving me great reinforcement and support," Kinsell said, "and I feel truly honored that the Friends of the Visual Arts has found a way that my name can continue to contribute to our program."

Kinsell and his wife now reside in the Davis Mountains of Far West Texas.

For more information about SFA art scholarship opportunities, contact the art office at (936) 468-4804.