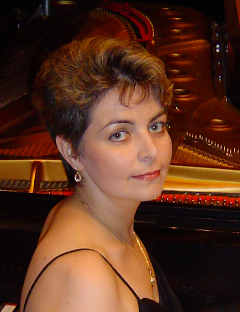 Praised by the Boston Globe, New York Concert Reviews and other media for her "impressive musicianship" and "exquisite pianism," Nosikova has performed extensively in Europe, Asia, Russia, South America and the United States.

Nosikova will perform "a lot of the lesser known works from the piano repertoire," according to Andrew Parr, professor of piano at SFA. Composers represented in her SFA performance are Muzio Clementi, Max Reger, Lera Auerbach and Franz Liszt.

The scope of her concert engagements expands from prestigious professional venues, such as Weill Recital Hall at Carnegie Hall and Merkin Hall in New York City, Shanghai City Hall in China and City Hall in Hong Kong, to major academic institutions worldwide.

An honor graduate of Moscow University, she earned her doctoral degree from the University of Colorado. Presently, she is a professor of piano at the University of Iowa where she teaches an international studio of award-winning graduate and undergraduate students.

As the prize winner of three international competitions, Nosikova often serves on competition jury panels. She has previously served as a juror for the Schmidbauer International Young Artist Competition at SFA.

The concert, which is a joint presentation of the SFA College of Fine Arts and School of Music, is part of the Cole Performing Arts Series. Tickets are $5 for adults, $4 for seniors and $2 for students. For tickets or more information, call the Fine Arts Box Office at (936) 468-6407.