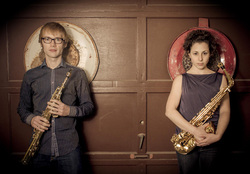 Ogni Suono Saxophone Duo will present "Hot off the Press!" at 7:30 p.m. Friday, Feb. 22, in Cole Concert Hall on the SFA campus.

Formed by Noa Even and Phil Pierick in 2010, Ogni Suono Saxophone Duo "is committed to expanding and promoting the repertoire for saxophone duo by commissioning and performing new works," according to Nathan Nabb, associate professor of saxophone at SFA.

"Hot off the Press!" is "an exciting program of saxophone duets commissioned by Ogni Suono," Nabb said.

"Ogni Suono has presented this program in Toledo and Windsor, Ontario, with upcoming performances in Boston, New York and Baltimore," he said.

Even has performed in France, Scotland, Thailand, Malaysia, Singapore, Israel and throughout the United States. In 2011, she was the only American prizewinner at the 3rd Jean-Marie Londeix International Saxophone Competition in Bangkok, Thailand, where she performed as a soloist with the Thailand Philharmonic Orchestra. Even currently holds a teaching assistantship at Bowling Green State University where she is working toward a Doctor of Musical Arts degree in contemporary music.

Pierick is currently pursuing a DMA at Eastman School of Music under the direction of Chein-Kwan. He is coach and coordinator of undergraduate saxophone quartets at Eastman. He is a three-time prizewinner at the MTNA National Young Artist and Chamber Music Competition. He took 3rd prize in the 2012 International Saxophone Symposium and Competition, was named Vandoren Emerging Artist of 2011, and won the 2012 University of Illinois Concerto Competition.