A Life Reimagined: Professional actor returns to his small-town roots and finds unexpected joy in teaching the next generation of movie makers 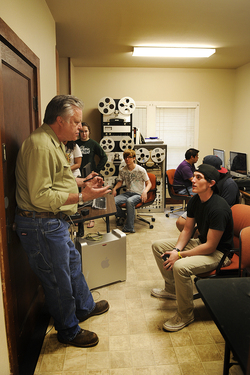 SFA cinematography students talk with Maule about their projects.

They say necessity is the mother of invention. When actor Brad Maule returned to East Texas in the spring of 2005, he didn't just need a job and a place to live, he needed to reinvent his life from the ground up. After spending two weeks driving the endless highways of his home state of Texas and taking stock of his life, he found himself back in Nacogdoches, where he had studied fine arts four decades earlier. "This is it," he remembers thinking after taking some time to rediscover the town he had all but forgotten during his years in show business. "This seems like a good place to get well."

This was by no means the first time in his life Maule had found himself at a crossroads. The summer after graduating from SFA in 1974, he struck off for Los Angeles with nothing but a car and $600. "I had absolutely no plan," Maule recalled during a recent interview at Java Jacks Coffee House, one of his favorite Nacogdoches haunts. "Well, that's not true. I planned to eat, and I planned to sleep. I just had no idea how I was going to pay for it."

He rented a cheap apartment and began reading the Hollywood trade magazines and auditioning for every acting and singing job for which he was remotely qualified. Surviving on a steady diet of 90-cent meatloaf sandwiches (which he bought and cut in half for two meals), Maule had stretched his $600 almost as far as it would go when he got his first big break. "I had $11 left, and I knew I couldn't call home and ask for more money. When that $600 ran out, I would be going back home to the family farm."

But it didn't come to that. Maule was hired by the Serendipity Singers, a touring folk group, to sing and play guitar. He spent the next year performing shows across the country and meeting people from all walks of life. "I was making $350 a week, which to a farm kid from West Texas seemed like about a million dollars," he recalled. "I remember being in awe that I could order anything I wanted off a restaurant menu. I got to see the whole country, and I had a great time doing it."

The Doctor is In

Eventually, Maule left the Serendipity Singers and, after a brief stint as a back-up singer for Hawaiian performer Don Ho, returned to California to pursue his acting dreams. He found work as a stage actor and also made guest appearances on popular '80s television shows like "Three's Company" and "Charlie's Angels." In 1984, 10 years after he left SFA for Hollywood, Maule was offered the role that would define his acting career over the next two decades. He joined the cast of the popular daytime serial "General Hospital" as Dr. Tony Jones, who became one of the most endearing and enduring characters in the genre's history. His legions of fans stuck with him through marriages and divorces and all manner of other drama for which soap operas are beloved - to say nothing of his many brushes with death.

"I was shot in the head, shot in the heart, paralyzed, impotent, blind, had four brain surgeries, was comatose and spent three months sleeping on the set - I also had my hand crushed, which, for a surgeon, was devastating," the two-time Emmy Award nominee said. In the end, it was complications from a rare strain of encephalitis that killed the character in 2006, breaking the hearts of "General Hospital" fans all over the country. What the viewers didn't know was that Maule's heart was breaking right along with theirs.

"ABC made the decision to end our relationship, and, after being part of that family for 20 years, it really felt a lot like a death. I grieved over it long and hard. I was 50 years old and became an unemployed actor overnight. At the same time, my 20-year marriage was ending, and I realized I had to start over."

Down on the Farm

Maule was raised on a West Texas farm that was 20 miles away from the nearest place you could call a town. He helped on the farm and made good grades in school, but, from the first grade on, the thing he looked forward to most was the community's annual talent show. He spent countless hours polishing his musical performances for the shows and won the competition more than once. "I always knew what I wanted to do - always," he said.

He made the decision in high school to move in with his grandmother in a nearby town with a larger school and joined some amateur country and rock bands. "It wasn't a big school by any stretch of the imagination, but at least I wasn't the only artsy kid anymore." Maule also spent two summers performing in a musical for tourists in Palo Duro Canyon State Park. "Being from the country, I was really uncomfortable meeting all those new people, but I desperately wanted to sing and act, and I felt at home in front of an audience. To this day, I am shy, but my calmest moments have always been when I'm on stage."

Maule decided to come to SFA based on a single criterion: annual rainfall. He said after being raised in a place where family fortunes were gained, lost and regained according to Mother Nature's whims, he wanted to be somewhere in Texas that didn't want for precipitation. He did well at SFA, earning a 3.7 grade-point average and graduating with a Bachelor of Fine Arts. Because he lived on campus and kept busy with his classes and SFA and community theatre productions, he never really spent much time getting to know Nacogdoches while he was a college student. So, when he returned to the Oldest Town in Texas in 2005, it was almost as if he were discovering it for the first time.

Maule said he relied on his "proud farmer heritage" to help him overcome the setbacks that led him back to Nacogdoches in search of a fresh start. "When the crop is ruined, you either give up or you plant all over again. I decided I was going to reinvent myself, put myself out there, put down roots in this place and try to become a part of the fabric of the community." He was thrilled to find a downtown Nacogdoches loft overlooking the brick streets. He volunteered time to promote the numerous festivals and special events hosted downtown each year and became an advocate for the continued development of the area. He began hosting a morning drive talk show on a local AM radio station, chewing the fat with local listeners about everything from politics to the fickle East Texas weather. Recently, he helped create the annual Nacogdoches Film Festival. He has also continued to pursue his musical career. His latest CD "Miles and Miles of Texas," a tribute album to swing music, will be released this summer.

"Brad is one of the biggest champions of downtown Nacogdoches, always willing to participate in our special events, whether it's a historical reenactment or a celebrity cooking competition," said Sarah O'Brien, city of Nacogdoches Main Street manager. "He has never denied a photo opportunity with a tourist or an autograph for an SFA mom claiming to be his biggest fan."

Maule also is a lecturer on the SFA faculty, teaching musical theatre, theatre appreciation, beginning and advanced cinematography, and acting for the camera. Teaching was something he said he never dreamed of doing, even after deciding to return to Nacogdoches. "Basically, I had some angels at SFA who helped make this all possible." Among them is William Arscott, the director and creative force behind SFA's distinguished cinematography program. The longtime professor gave Maule his only C in college, and, while both agree he deserved the grade, Maule seems to take pleasure in the fact that he has now "come back to haunt" Arscott by sharing his small faculty office in the cinematography building.

"As an actor, I know what the finished product should look like because I've done it my whole life," Maule said. "I had to learn how to break it down and teach it in parts, which is something good teachers do naturally. Luckily, I have some amazing colleagues who are role models for me, and I am becoming more comfortable in the classroom and enjoying working with the students." As for his past success in show business, Maule says that is worth "about one Google search" to his SFA students, most of whom have never heard of Dr. Tony Jones or "General Hospital," "although their grandmothers are usually thrilled." A proud father of two, 26-year-old Hunter and 25-year old Lily, Maule said he enjoys interacting with that age group and learns as much from his students as they do from him.

Arscott said Maule brings a unique perspective to SFA's cinematography program. "He is very good at understanding actors, and, since his minor at SFA was in English, he is also good at working with our students on storytelling," Arscott said. "The students respond to him very well."

Despite all that Maule has accomplished since returning to Nacogdoches, the most significant change has occurred in his heart. He says his spirit has been renewed, in both a religious and emotional sense.

"My father always said 'you can't leave your raisin',' and it turns out he was right," Maule said. "Here I am living in a small Texas town, plowing along and trying to put in a good day's work every day. I feel lucky and very blessed to live and work here, and I will always be grateful to the people of Nacogdoches and SFA for making me feel at home." 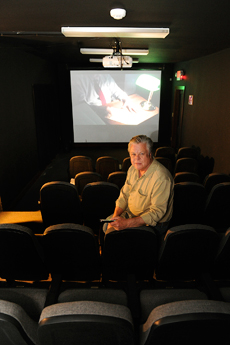 Maule is pictured in the screening room in the SFA cinematography department where his students were preparing to share their end-of-semester film projects.