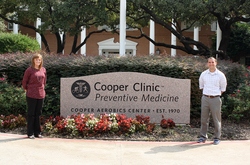 Recent SFA graduates Lilly Kemp and Nathan Frischmann are settling into their "dream jobs" as health screens technicians at the renowned Cooper Clinic in Dallas. Photo courtesy of Cooper Clinic.

As graduate students in SFA's Department of Kinesiology and Health Science, Lilly Kemp and Nathan Frischmann both had their hopes riding on a job at the world-renowned Cooper Clinic in Dallas. A Facebook posting by a friend prompted Kemp to apply. Frischmann had sent in his application months earlier after hearing Dr. Kenneth Cooper, founder of Cooper Aerobics Center, speak at a conference. Initially, neither student knew of the other's application.

It was a busy time of year. The two were graduating in just a few weeks and spending almost every spare minute studying for finals. When the pair finally crossed paths, they learned they were vying for the same job. Later, both received phone calls and traveled to Dallas to interview for the position of health screens technician.

As their 2012 graduation approached, Kemp and Frischmann were becoming increasingly concerned that neither had heard back from the clinic. Then, just one week before graduation, Frischmann got the call he'd been hoping for - a job offer.

When Kemp heard the news, her heart sank. "I was devastated because I had my hopes on landing that job, but I also was excited for Nathan. After working alongside him as a graduate assistant, I knew he'd do great. It was just really hard not to feel down."

But just as the realization she hadn't been hired for her dream job began to set in, Kemp got a phone call that drastically altered her mood. It was the clinic, calling to offer her the same position.

"Neither Nathan nor I knew they were hiring for two health screens technicians," she said. "I was so thrilled."

Kemp and Frischmann, who both received bachelor's degrees from SFA in 2010, are settling into their new careers at Cooper Clinic where patients undergo physical exams and medical testing and receive individualized health plans.

"We do everything from body composition and pulmonary screenings to eye exams, hearing tests and the occasional
electrocardiogram," Frischmann said. "I think my favorite part of working at Cooper is being able to share my passion for health with the patients and help them realize what they can do to live healthier lifestyles."

Kemp shares Frischmann's enthusiasm. "What most attracted me to Cooper Clinic is that it revolves around preventive medicine. I love working with clients who are focused on being healthy and trying to prevent illness," Kemp said.

Alicia Baker, a 2007 SFA graduate and senior team leader at Cooper Clinic, said both Kemp and Frischmann are excelling in their positions. "Lilly has taken every task assigned to her and is extremely self-sufficient and needs little guidance from supervisors. She always looks to help coworkers in any way she can," Baker said.

"Nathan has quickly progressed through his training to move up within the Exercise Physiology Department," she said. "Being a fairly recent SFA graduate myself, I knew from the coursework and training that was provided to us through the kinesiology department that these two SFA graduates would be an excellent fit at Cooper Clinic."