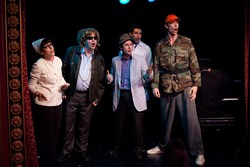 "Broadway's Next H!T Musical" abandons the same old song and dance to create a brand new, fully improvised musical comedy every week. Every lyric, melody and accompaniment is made up on the spot to create a show that is energetic and hilarious, according to John W. Goodall, associate dean of the SFA College of Fine Arts.

"Those attending this performance will become part of the fun as suggestions from the audience are used to create an improvised musical from the stage about Nacogdoches," Goodall said.

The New York Post described the show as having "a spontaneity, wit and inventiveness that must be seen to be believed."

Before the performance, there will be a 7 p.m. informative talk presented by Jason Davids Scott, assistant professor of theatre, in Griffith Gallery, located across the hall from Turner Auditorium. The audience is invited back to the gallery for a post-performance reception to honor the event's corporate sponsor, BancorpSouth.