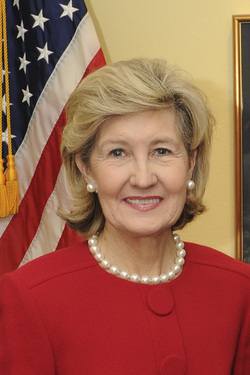 Hutchison served as senator from 1993 through January 2013 and remains the only woman to have represented Texas in the U.S. Senate. She is expected to discuss her latest book, "Unflinching Courage: Pioneering Women Who Shaped Texas."

The speaker series event is scheduled for 7:30 p.m. Thursday, April 11, in the Grand Ballroom of the Baker Pattillo Student Center on the SFA campus.

"During Sen. Hutchison's tenure in the Senate, SFA received federal funding to support important ongoing research in many areas, including education, forestry and agriculture," said Dr. Baker Pattillo, university president. "She was one of SFA's strongest proponents in Washington, and the university is eternally grateful for her strong support and friendship throughout the years."

Hutchison was a member of the Republican National Hispanic Assembly National Advisory Committee. In 2012, she was unanimously elected chairman of the Board of Visitors at the U.S. Military Academy at West Point. She previously served as chairman of the board from 1998 to 2000 and from 2008 to 2009 before being re-elected to serve again this year.

The former senator grew up in La Marque and graduated from the University of Texas and UT Law School. She was twice elected to the Texas House of Representatives and was elected Texas state treasurer in 1990. In June 2000, she and several colleagues co-authored "Nine and Counting: The Women of the Senate," and in 2004, she released her first book, "American Heroines: The Spirited Women Who Shaped Our Country." Hutchison published her most recent bestseller, "Leading Ladies: American Trailblazers," in October 2007.

Hutchison did not seek re-election to the Senate in 2013 and chose to donate some of the artifacts from her historic political career to SFA. The artifacts, which include service awards, photographs taken with world leaders and other items of historical interest, are now on display in the Senator Kay Bailey Hutchison Room in SFA's Ralph W. Steen Library.

SFA's speaker series was created in spring 2010 by the College of Liberal and Applied Arts to honor and preserve the legacy of Dr. Archie McDonald, as a distinguished scholar, educator and community commentator. In the tradition of McDonald's writings and oral presentations, a prominent national figure is hosted annually at SFA to discuss contemporary cultural issues.

McDonald taught history at SFA for 48 years and served as director of the East Texas Historical Association and editor of the association's journal for 37 years. He was a past president of the Texas State Historical Association, past vice chair of the Texas Historical Commission and author/editor of more than 20 books on historical topics. Along with teaching, McDonald served as the university/community liaison for SFA, was a weekly commentator on Red River Radio in Shreveport, and wrote a weekly column for The Daily Sentinel in Nacogdoches and other newspapers. He passed away on Aug. 16, 2012.

She said she looks forward to interviewing Hutchison, who personifies the pioneering women about whom she frequently writes.

"In East Texas, we talk about people who 'carry the water and tote the wood,'" McDonald said. "With her service in both our state government and in the U.S. Senate, Kay Bailey Hutchison definitely fits that description. She served as a member of the most exclusive 'men's club' in the nation - the U.S Senate - and not only served admirably, but rose to considerable power. It was certainly a loss for Texas and SFA when she decided it was time for a break from public service."

The speaker series event is free and open to the public. Free passes may be obtained at the Involvement Center on the first floor of the Baker Pattillo Student Center or at the Nacogdoches Convention and Visitors Bureau in downtown Nacogdoches. For more information, call (936) 468-2605.