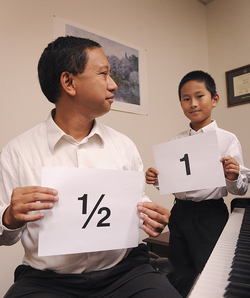 Dr. Mario Ajero, associate professor of piano at SFA, will be joined by his son, 9-year-old Antonio "Nio" Ajero, when they present "One-and-a-Half Pianists" at 7:30 p.m. Thursday, Nov. 14, in Cole Concert Hall on the SFA campus.

Dr. Mario Ajero, associate professor of piano at SFA, will be joined by his son, 9-year-old Antonio "Nio" Ajero, in a unique program that will showcase accompaniment by a computer-generated virtual orchestra.

The biggest piece on the program will be the Piano Concerto in G Minor, Op. 25 by Felix Mendelssohn, according to Ajero.

"Traditionally, this piece is performed by a piano soloist accompanied by a symphony orchestra," Ajero explained. "However, we will use a technology-equipped Yamaha Disklavier piano connected to a smart-accompaniment program controlling a computer-generated virtual orchestra."

Ajero and his son demonstrated this combination of technologies at the Australasian Piano Pedagogy Conference this past summer and also at this past year's TEDxSFA event.

"This is beneficial to pianists so that they can simulate what it's like to perform with a symphony orchestra and be better prepared when the opportunity arises to play with one," Ajero said.

The father-son duo will also perform the first movements of two different piano sonatas: Piano Sonata in F Major, K. 332 by Wolfgang Amadeus Mozart and another Piano Sonata by Aaron Copland. The program will also include four-hand piano duets, one of which will be the Marche Militaire in D Major, D. 733, No. 1 by Franz Schubert.

"This will demonstrate the use of the Yamaha Disklavier Piano's video-synchronization capabilities by allowing a pianist to record his performance on video in perfect synchronization with the key strokes and pedal movements on the player piano," Ajero said.

Antonio, who studies with his father, has already performed four solo recitals at SFA, with one of them being broadcast live on Yamaha's website for DisklavierTV. He recently won first prize in the East Texas Piano Solo Festival and also second prize in the Young Artist Piano Competition at Texas State University.