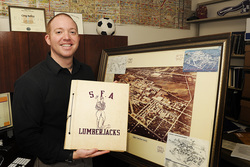 Greg Bailey, records manager and university archives librarian at SFA, displays a 1948-49 scrapbook recently donated to the East Texas Research Center. The center is encouraging donations of documents and memorabilia to help grow the University Archives in honor of SFA's 90th anniversary.

NACOGDOCHES, Texas - The East Texas Research Center at Stephen F. Austin State University invites alumni and others to donate SFA documents and memorabilia to help grow the University Archives in honor of the 90th anniversary.

"These and other unique items enrich our archives and play an important role in the documentation of the history of Stephen F. Austin State University," he said. "They also serve as primary resources for student and faculty researchers, as well as the East Texas community as a whole."

Recently an "SFA Lumberjacks" scrapbook from the 1948-49 school year was donated to the archives after an alumna happened upon the book while antique shopping. Concerned for its welfare, the woman purchased the scrapbook and donated it to the ETRC where it will become part of the permanent university collection.

"If you or your parents or grandparents are former students, you may have saved photographs, scrapbooks or other mementos from SFA that would benefit researchers of the university's history many, many years from now," Bailey said.

"We certainly don't want to take away anyone's treasured keepsakes. But, often times, these items are thrown away when they are no longer wanted or needed. We strongly encourage anyone with SFA items they no longer want to donate them to the ETRC where they can be properly preserved."

Donations of SFA memorabilia may be made in person at the ETRC, located on the second floor of Steen Library.

The ETRC also is collecting former students' favorite memories of SFA through the ongoing Alumni Memory Project. The project's goal is to collect, preserve and make available to the SFA community the history of student life at the university. Memories are added to the University Archives digital collection as they are received.

Also coinciding with SFA's 90th anniversary, the ETRC staff has developed the SFA Timeline, a pictorial view of the expansion of the university through the nine decades of its existence. The SFA Timeline features photographs and brief biographies of the university presidents, histories of college buildings, and narratives of significant campus events. This is an ongoing project that will periodically receive updates.

For more information about contributing to the University Archives or the Alumni Memory Project, call (936) 468-4100 or visit library.sfasu.edu/etrc. The SFA Timeline may also be viewed at this website.