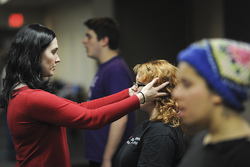 For the student actors auditioning for "A Midsummer Night's Dream," there were no "do-overs," no interjections from a director who is familiar with their capabilities and previous work. Instead, guest director Chuck Hudson heard each SFA student's audition and moved on, much like he runs open calls in New York.

The rehearsals, too, were more intense (and "a bit of a shock for some," according to Hudson), but that level of professionalism is just what Scott Shattuck, director of the SFA School of Theatre, was seeking when he asked the internationally acclaimed artist to guest direct the Shakespearean comedy.

To best prepare SFA theatre students for their entry into the "real world of theatre" where they'll be working with numerous directors, actors and designers, Shattuck is committed to bringing the professional world to campus.

"Already each of our Bachelor of Fine Arts students completes a nine-month internship either with a professional theatre company or in European conservatories. But it's important for all of our students to work with professionals throughout their undergraduate careers," Shattuck explained.

League City senior Rebecca Mersinger is thankful for Shattuck's vision. When Robert J. Martin, the assistant costume designer of "Mamma Mia" and 12 other Broadway shows, agreed to design the costumes for SFA's fall production of "Rabbit Hole," Mersinger worked as his assistant designer.

"It was a wonderful opportunity for me to learn that there is more than one way to do something and to realize that even New York professionals are human," Mersinger said. "I'll be able to use that knowledge as I seek employment as a wardrobe master."

The three newest faces on the theatre faculty are also helping Shattuck meet his goal of exposing students to professionals.

Members of The "New" Original Cast, a variation of the musical comedy troupe founded in 1990 by recently retired Professor Alan Nielsen, are benefitting from Scott's training in improvisational comedy. The ensemble's latest Christmas show was "a completely collaborative effort," explained Scott, the group's director.

Award-winning actress and visiting assistant professor Toni Smith, who earned degrees from New York University's Tisch School of the Arts and the University of California-Los Angeles, has worked extensively on stage and screen and as a voice-over artist. She uses her vast training in voice and dialects to teach and coach SFA actors.

"Her lessons on articulation, clarity and voice preservation were immensely helpful for my portrayal of Demetrius in 'A Midsummer Night's Dream,'" said Weslaco senior Jonathan Garcia.

David Studwell, another visiting assistant professor, has more than 27 years of experience on stage, television and film and has taught at Cornell University and the Pacific Conservatory of the Performing Arts. His professional parts have ranged from Hamlet to the title role in the musical "Sweeney Todd."

The award-winning actor said the academic theatre setting allows him to work alongside the students, as he did while portraying Oberon in "A Midsummer Night's Dream" and Dr. Chebutykin in Anton Chekhov's "Three Sisters." "The collaboration reminds me of the European master, journeyman, apprentice model-a tried and true system in which (the trainees) learn by doing."

"Working with artists that really know the worlds of Broadway, Hollywood, Chicago and Europe prepares our students to launch professional careers," said Shattuck. "Our alumni are confident that they can succeed in the most demanding venues because they've been trained by pros who have been there."