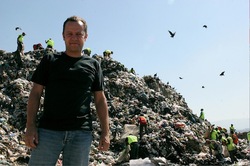 Photographer Vic Muniz is shown at Jardim Gramacho, Rio de Janeiro's metropolitan landfill, which receives more trash daily than any landfill in the world. Muniz's photographs of pickers of recyclables here is the subject of the documentary film "Waste Land," which will be shown at 7 p.m. Friday, Nov. 2, at the Cole Art Center as part of the SFA School of Art and Friends of the Visual Arts' First Friday Film Series.

Filmed over nearly three years by acclaimed documentarian Lucy Walker, "Waste Land" follows renowned artist Muniz as he journeys from his home base in Brooklyn to his native Brazil and the world's largest garbage dump, located on the outskirts of Rio de Janeiro, according to information at www.wastelandmovie.com.

There, Muniz photographs an eclectic band of "catadores," who are self-designated pickers of recycleable materials. Muniz's initial objective was to "paint" the catadores with garbage. However, his collaboration with the inspiring characters as they recreate photographic images of themselves out of garbage reveals both the dignity and despair of the catadores as they begin to re-image their lives, according to the website.

"The film offers stirring evidence of the transformative power of art and the alchemy of the human spirit," the site said.

Since its premier at the Sundance Film Festival in 2010, the film, which is unrated, has won awards at more than 25 film festivals.

All films in the First Friday Film Series are free. "Waste Land" is sponsored by Dr. Sergio Moreira and his wife, Samantha, a member of the Friends of the Visual Arts. Films are presented by the SFA Art Galleries, SFA Friends of Visual Arts and the Nacogdoches Junior Forum.