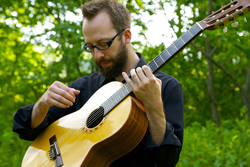 Classical guitarist Joe Williams will be one of the guest musicians performing in the "Music of the South" concert on Tuesday, Aug. 14, the second of four performances included in the SFA School of Music's 2012 Chamber Music in the Pines Festival held in Cole Concert Hall on the SFA campus.

NACOGDOCHES, TEXAS - Chamber music from Argentina, Italy and Spain will be featured during "Music of the South" at 7:30 p.m. Tuesday, Aug. 14, in Cole Concert Hall. The concert is the second of four included in the Stephen F. Austin State University School of Music's 2012 Chamber Music in the Pines Festival, "Musical Directions."

"This particular concert brings something new to the festival," said Dr. Jennifer Dalmas, SFA associate professor of music and the festival's director. "For the first time we are performing chamber music that features the guitar: Astor Piazzolla's 'L'histoire du tango' and Luigi Boccherini's 'Guitar Quintet No. 4 in D major, G 448.'"

The celebrated performer, composer and educator has won awards in 13 international guitar competitions and performed in festivals and concert series in the United States and abroad.

Also included on the program will be Joaquín Turina's "Piano Quartet in A minor, Op. 67," performed by Levinson, Jeffery, Raychev and guest pianist Baya Kakouberi.

All of the concerts are held in Cole Concert Hall, located in the Tom and Peggy Wright Music Building, 2210 Alumni Dr. on the SFA campus.