SFA offers final performances of 'How I Became a Pirate' 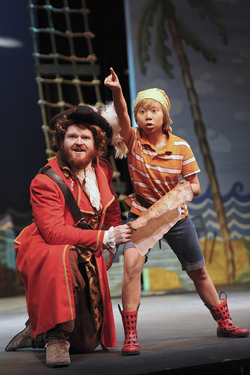 Houston senior Kurt Bilanoski (portraying Captain Braid Beard) and Mesquite senior Mai Lê (playing Jeremy Jacobs) rehearse a scene from the SFA School of Theatre's production of "How I Became a Pirate." The three final performances of the popular one-hour family musical will be presented at 10 a.m. Thursday, July 12, and Friday, July 13; and at 6:30 p.m. Saturday, July 14.

NACOGDOCHES, TEXAS - Seats are still available for any of the final three performances of the popular family musical, "How I Became a Pirate," which the Stephen F. Austin State University School of Theatre is presenting in W.M. Turner Auditorium as part of its summer season.

Janet Yates Vogt and Mark Friedman's one-hour musical adaptation of Melinda Long's best-selling book will be offered at 10 a.m. Thursday, July 12, and Friday, July 13. The show will close with a 6:30 p.m. performance on Saturday, July 14.

"We've had a terrific response to the play so far," said Diane Flynn, SFA Fine Arts Box Office manager. "Everyone is enjoying the story of young Jeremy Jacobs and his imaginative adventure with a comical pirate crew."

"It's always so great to see and hear the kids and parents react to what we're doing," said Woodlands sophomore Nick Pinelli, who plays one of the pirates, Max. "There's a nice combination of humor for all ages."

Stage manager Jennifer Sims said the audience is enjoying songs such as "Talk Like a Pirate" and "How to Play Soccer by the Rules," as well as "I'm Really Just a Sensitive Guy," which is sung by the tough-looking Sharktooth, portrayed by Weslaco senior Jonathan Garcia.

"The song and the ballet I dance teach the children not to judge a book by its cover," said Garcia.

Dallas senior Jennifer Suter, who plays Swill, said she enjoys meeting the young audience members in the lobby after each show. "They're a bit shy, but the parents often tell us what the children found particularly funny or which character they liked the best."

"It's a good, wholesome show with a message about the importance of family," Pinelli said. "We're having a lot of fun with it."

Tickets are $6 for individuals and $5 each for groups of 20 or more. W.M. Turner Auditorium is located in the Griffith Fine Arts Building, 2222 Alumni Drive.