SFA center to receive leadership from grandson of Gandhi 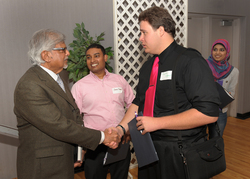 NACOGDOCHES, Texas - The Center for a Livable World at Stephen F. Austin State University will benefit from guidance based on the philosophy of one of the world's greatest leaders. Arun Gandhi, the grandson of Mahatma Gandhi, has agreed to serve as a senior fellow for the center.

"Mr. Gandhi said his grandfather's mission really would not be complete until he could come to the West and share the same kind of philosophy with others," Segady said. "He was impressed with SFA and the students."

Dr. Brian Murphy, dean of the College of Liberal and Applied Arts at SFA, said senior fellows are prominent leaders in the field of sustainability whose involvement is designed to strengthen the capabilities of the center to conduct cutting-edge analysis of issues that touch upon sustainable development.

"The Center for a Livable World explores the human dimensions of sustainable development and offers a vision for the future that emphasizes community development, personal engagement and economic responsibility," he said. "The center serves as a crossroads for all viewpoints and promotes dialogue that leads to practical solutions and shared values."

There are commonalities in the philosophies of sustainability and nonviolence, Gandhi said.

"Sustainability is an important part of the philosophy on nonviolence," Gandhi said. "We do a lot of violence to nature, not just to human beings. Any effort we can make to eliminate that violence serves to further the mission of our work."

An active public speaker, Gandhi said he has found that the students on college and university campuses are interested in nonviolence and are open to alternatives that create a positive change.

"I found the same thing with the SFA students - they are interested but don't know what could be done," Gandhi said. "We need to give them some ideas for a comprehensive philosophy of nonviolence. We all need to live it and practice it every day until it makes sense and becomes natural to us.

Gandhi said his primary goal is to work with others to make the world a better place for future generations through education that is more than just "textbook learning."

"You learn from every individual you meet and from every experience you have every day," he said. "Education is a lifelong process, but only if we have an open mind. If we close our mind and think that because we now have our college degree, we don't need to do anything more, we stagnate. We need to continue to learn, just as we need to strive every day to make ourselves better human beings."

Gandhi worked for 30 years as a journalist for The Times of India. For the past five years, he has participated in the Renaissance Weekend deliberations with former President Bill Clinton. Gandhi is the author of several books, including "A Patch of White" and "The Forgotten Woman: The Untold Story of Kastur, the Wife of Mahatma Gandhi," which he wrote jointly with his late wife, Sunanda.

For more information, about the Center for a Livable World, call (936) 468-2803 or visit www.sfasu.edu/livableworld.