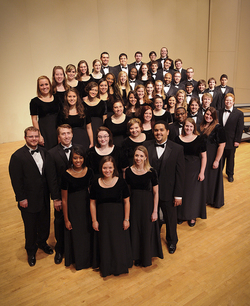 The SFA A Cappella Choir will present a concert at 7:30 p.m. Monday, March 5, in Cole Concert Hall. The program includes works the ensemble recently performed for choral directors from seven states and pieces the choir will sing during its 11-day European tour in May.

The 52-member choir recently performed the first half of the program at the spring convention for the Southwestern Division of the American Choral Directors Association in Dallas on March 1.

Under the baton of SFA Director of Choral Activities Dr. Tim King, SFA's premier vocal ensemble was one of only seven university choirs invited to perform for the choral directors representing public and private schools in Arkansas, Colorado, Kansas, Missouri, New Mexico, Oklahoma and Texas.

The second half of the program consists of music the choir is preparing for its upcoming 11-day tour of Austria and the Czech Republic, which includes singing a Mass and concert in St. Stephen's Cathedral in Vienna, where non-Austrian choirs are seldom invited to sing.

Another highlight of the May tour will be an exchange concert in Prague with Hlalol Choral Society, one of the oldest and most prestigious choirs in the Czech Republic, according to King.

Because the Nacogdoches concert combines music prepared for several audiences, it has a wide range of appeal, said King. "The program includes music of such simplistic beauty as the traditional 'Shenandoah' arranged by James Erb, to a gospel arrangement of 'Precious Lord' to the very refined 'O Crux' by Knut Nystedt."

The March 5 concert, which is a joint presentation of the SFA College of Fine Arts and School of Music, will be performed in Cole Concert Hall in the Wright Music Building, 2210 Alumni Drive.