SFA A Cappella Choir to embark on European tour 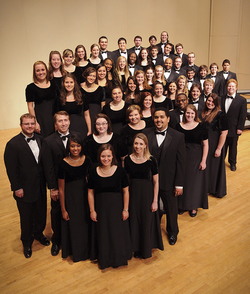 The A Cappella Choir at Stephen F. Austin State University will leave Thursday, May 17, for an 11-day European concert tour, which will also include visits to historical sites.

NACOGDOCHES, TEXAS - With reading assignments, papers and final exams behind them, most Stephen F. Austin State University students have gone home for the summer or are taking a brief break before summer school begins.

The 52 members of the A Cappella Choir, however, are busy packing their bags, double checking the location of their passports and mentally going over their vocal parts as they prepare to meet Thursday afternoon for their flight to Frankfurt, Germany, the first leg of their 11-day European concert tour to Austria and the Czech Republic.

Under the direction of Tim King, SFA director of choral activities, the choir will be providing music for three Masses and presenting at least six concerts of varied music, including American folksongs and spirituals.

"Every three years or so, the A Cappella Choir travels to Europe so that the students can visit the sites they've only read about in their classes," said King. "For instance, we'll visit the house in Salzburg where Mozart was born and see actual instruments he played, and we'll perform in St. Stephen's Cathedral in Vienna, the very church where Joseph Haydn was a choir boy."

The Mass and later concert in St. Stephen's is particularly significant because non-Austrian choirs are seldom invited to sing there, King explained.

The director said another highlight of the tour will be the concert in Prague with the Hlahol Choral Society, one of the oldest and most prestigious choirs in the Czech Republic. "Each choir will present half of the program, and then we'll sing a few pieces together."

Throughout the school year the students have been preparing the tour music, some of which the choir sang during the opening of the annual conference of the Southwestern Division of the American Choral Directors Association in March.

Marie Sanford, Nacogdoches graduate student, said all of the hard work has been worth it. "This is a once-in-a-lifetime opportunity to perform in the same cathedrals where so many great composers presented their works. I can't wait!"