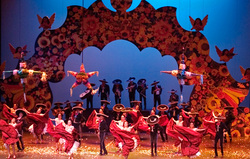 "Designed to bring quality fine arts experiences to East Texas, the series consists of five highly acclaimed touring groups and four university-produced performances," said John W. Goodall, associate dean of the College of Fine Arts. "Also included on the series, but at no cost to the patrons, are four outstanding art exhibitions at The Cole Art Center @ The Old Opera House."

The season begins Friday, Sept. 14, with legendary songwriter Jimmy Webb, who will share his catalog of hits such as "Wichita Lineman,"

On Saturday, Oct. 6, "The World of William Joyce" will open at The Cole Art Center. The exhibition consists of drawings and paintings by the author and illustrator of over 50 children's books, including "George Shrinks" and "Rolie Polie Olie." Joyce has also won an Oscar and three Emmys for his animations. The show runs through Saturday, Dec. 15.

The SFA Schools of Theatre and Music will present "Little Shop of Horrors" Tuesday, Oct. 9, through Saturday, Oct. 13. The hit, pop musical tells the hilarious story of a florist and his plant that is part Venus flytrap and part rock star.

The dancers of Ballet Folklórico de México will bring their internationally acclaimed program to Nacogdoches on Thursday, Oct. 18.

For over 50 years, the group has dazzled audiences with its dance steps, music and costumes.

"Contemporary Texas Visions in Hispanic Art," a group show that features a variety of perspectives on border issues, urban pressures and other topics affecting Hispanic culture, will open on Saturday, Oct. 27. The exhibition runs through Saturday, Dec. 15.

Dailey and Vincent, twice named Entertainers of the Year at the International Bluegrass Music Awards, will present "A Bluegrass Christmas" on Friday, Dec. 14. The performance will include a blend of bluegrass-tinted holiday favorites, original songs and bluegrass classics.

The people, landscapes and culture of the American Southwest will be featured in "Big Skies, Brave People: Southwest American Art from the Panhandle-Plains Historical Museum, Canyon, Texas." The show opens Saturday, Jan. 26, and runs through Friday, March 22.

Audience participation will be encouraged on Thursday, Feb. 7, as the cast members of "Broadway's Next Hit Musical" gather made-up song suggestions from patrons and create a full-blown improvised musical about Nacogdoches-complete with plot twists, memorable characters and witty dialogue.

On Saturday, Feb. 9, "Linda Ridgway: A Song Only to Herself" will open at The Cole Art Center. The acclaimed artist, whose sculptures and drawings suggest a feeling of lost or suspended time, will be present for the opening. The show runs through Friday, March 29.

Beginning Tuesday, Feb. 26, through Saturday, March 2, the School of Theatre will present "Stage Door," a comedy set in a boarding house for aspiring actresses longing for stardom. According to Scott Shattuck, director of the School of Theatre, the characters' romances, disappointments and breakdowns provide more laughs and drama than all the Broadway plays they dream of.

Thursday, April 4, through Saturday, April 6, the SFA School of Music will present-in English-one of the masterpieces of operatic literature (title to be announced in the fall). Director Deborah Dalton, SFA associate professor of voice, said the production will feature supertitles and, of course, beautiful music and exceptional voices.

All of the concerts and staged productions on the University Series will begin at 7:30 p.m., and all but one will be held in W.M. Turner Auditorium with reserved seating. The exception is "Messiah," which will be held in Kennedy Auditorium and have general admission seating.

on Saturday. Admission is free.

Season tickets for the University Series are now on sale through the Fine Arts Box Office. They range from $125 to $185, with discounts available for seniors, students, youth and SFA faculty and staff.

"These are fantastic prices for quality entertainment, " exclaimed Diane Flynn, Fine Arts Box Office manager. "Season tickets provide a 25-percent savings over single tickets, and patrons can have their same seat throughout the season."

"Plus, we offer two season ticket options," she said. "The classic package includes one ticket to each of the nine performances, and the TixMix package allows the patrons to create their own nine-ticket season."

Single-event ticket purchases for the University Series or any of the other performances presented through the College of Fine Arts can be made beginning Monday, Aug. 20.